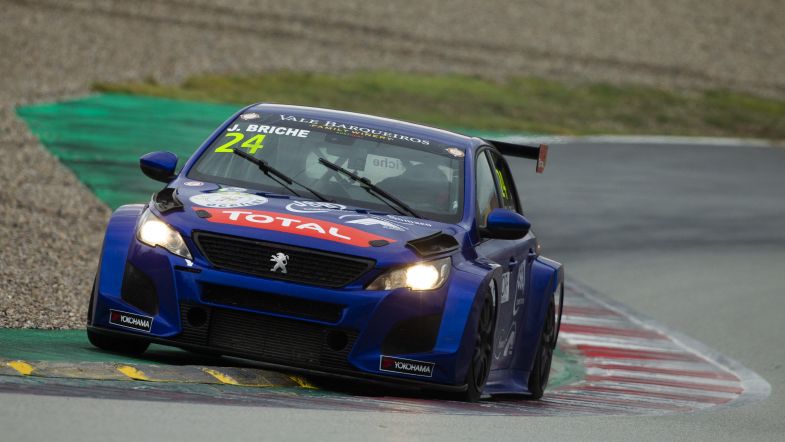 Julien Briché says he had to attack “from the first lap to the last” in order to secure his fourth TCR Europe series victory of the season in the first race at Barcelona.

The JSB Competition Peugeot driver made a sensational start from third on the grid to lead into the first corner and maintained a slender advantage throughout.

Briché’s win moves him into second in the standings, although the Frenchman remains 49 points adrift of championship leader Josh Files, who finished 22nd after a post-race penalty.

“Honestly, it was a very tricky race,” Briché told TouringCarTimes.

“This win was probably the most important in terms of keeping us in the championship.

“I had a good start and made a bit of a break but unfortunately there was the safety car. I tried to do the same after the restart but Files was always within a couple of tenths of me, so I was attacking from the first to the last lap.

“For the championship, it’s certainly very difficult because we are 50 points behind. And Josh, if he doesn’t make any mistakes, he is champion, there’s no real issue there,” he added.

Running with 30kg less compensation weight in his 308TCR compared to the previous round, Briché believes it was this performance advantage which proved crucial in his strong getaway off the line.

“It definitely helped that the Hyundais were a bit heavier, we don’t have the same engine but they are no doubt quicker in a straight line than us, but it was a great battle.”

“Four victories in the season, it’s good. I think if we take each race as it is, not get involved in any incidents then we might be able to close up a bit more. We’ll see.”

Briché remains under investigation for a suspected jump-start which may affect his result, but the Peugeot driver felt everything was above board from his side.

“I don’t know, there is an investigation but I think it was okay,” he said.