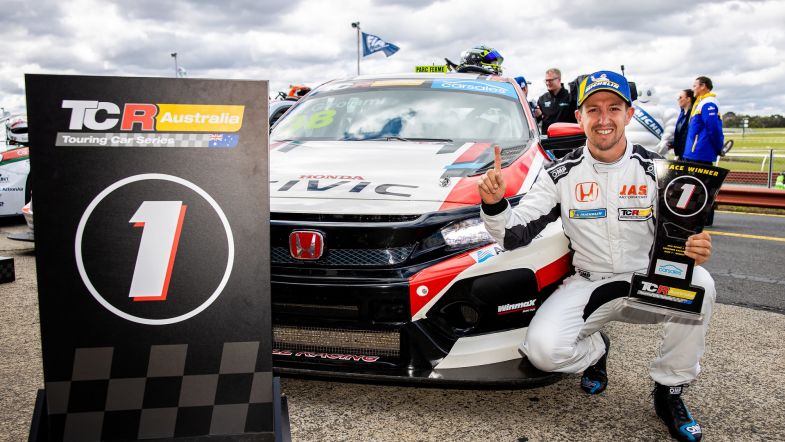 Honda driver Néstor Girolami has hailed his first weekend racing in the TCR Australia series as “a crazy weekend” after starring as a wildcard for Wall Racing in the team’s #38 Honda Civic Type R TCR.

The Argentinian World Touring Car Cup star was able to prove his experience in the hot hatchback class amongst Australia’s top stars and full-time drivers in the Australian TCR championship, going fastest in both practice sessions, qualifying and winning every race.

By taking a clean sweep, Girolami is the first driver in the category’s history to win every race in a weekend, carrying on from where Jean-Karl Vernay left off after the Frenchman took a race win at Queensland Raceway for the Melbourne Performance Centre in their Audi RS 3 LMS.

Girolami says the weekend was amazing and that he has Wall Racing team principal David Wall to thank for giving him an opportunity to make his first visit to Australia.

“First of all I want to congratulate Will Brown for becoming champion in the first season of TCR Australia, it’s been a fantastic season for him so far and for us it was a crazy weekend.

“We won all (the races); what can I say? I have no words. I have to congratulate the team, they have a very good team. Thanks David Wall for being confident in me, he trusted me and called me at the last minute, I decided to take it.

“I’m so proud of the team, thank you David Wall for inviting me, thank you for all the support I received from TCR Australia. It was an amazing weekend, I really enjoyed Australia so I hope to come back.”

Next on Girolami’s schedule is the WTCR Race of Japan at Suzuka on October 25-27th.