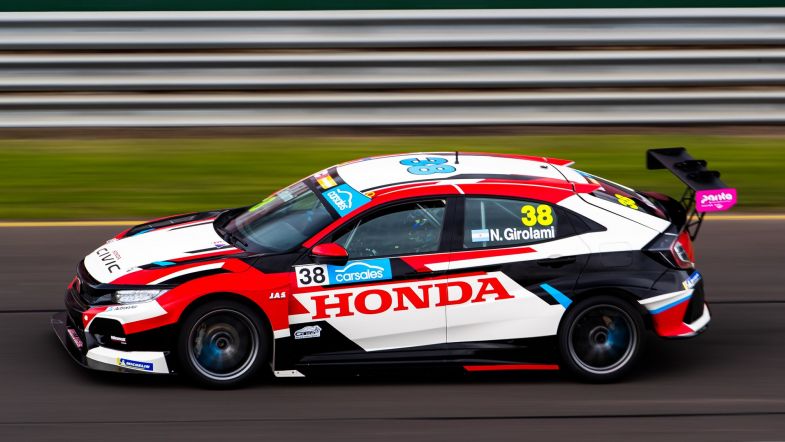 An action packed day of Sunday racing at Sandown Raceway has been capped off by a third win for Argentinian import Néstor Girolami as a strong result for Will Brown has given the young gun the inaugural TCR Australia series title.

Girolami was able to again be the fastest of anyone over the weekend, taking the Wall Racing Honda Civic Type R TCR to the top step of the podium in every race of the round and deliver the team their first clean sweep of the season.

With a consistent day of results and finishing ahead of his championship rival, Brown was able clinch the title for HMO Customer Racing with a round still to run, the Hyundai i30 N TCR driver now with a points lead which can’t be surpassed by anyone.

Another lightning start for Girolami gave him the holeshot into Turn 1, being followed by Wall Racing team-mate Tony D’Alberto who got past Garth Tander’s Melbourne Performance Centre Audi RS 3 LMS to take second on the opening lap.

Championship leader Brown had a great start from seventh in his Hyundai i30 N TCR, getting up to fifth by Turn 2 but he nearly threw it all away at Turn 3, spinning off the road and dropping to last place, having to fight his way back from the rear of the field after stalling while trying to rejoin the track.

Tander was able to work his way past D’Alberto to retake second, setting off on the chase of Girolami who was enjoying a healthy lead of one second at the front, both well clear of those behind them.

Lap three saw a mistake for championship contender Dylan O’Keeffe, running wide at Dandenong Road and off into the gravel trap, luckily retaining momentum but dropping a spot to Brown who just needed to finish in front to effectively claim the title.

As Girolami stretched out his lead by going under the lap record, Brown set the category’s new fastest race lap at Sandown as he caught back up to the pack in front, getting past team-mate Nathan Morcom for tenth as O’Keeffe suffered back in 14th.

A tight battle for third involved D’Alberto as the cork in the bottle ahead of Kelly Racing’s Holden Astra TCR entries, headed by Bryce Fullwood with Andre Heimgartner behind him. Heimgartner was able to move to third after displacing Fullwood then D’Alberto in a matter of laps.

Girolami came under fire from Tander in the closing laps, the MPC driver getting within a second of Wall Racing’s wild card but the experienced racer couldn’t find a way past. Further back, Fullwood endured a tough penultimate late, going off the road and losing spots to the Garry Rogers Motorsport Alfa Romeo Giulietta TCR of Jordan Cox and the MPC Volkswagen Golf GTI TCR of Jason Bright, dropping to seventh from fifth.

While Girolami was able to take the win, a right rear puncture for Cox took the Alfa Romeo off the road and out of the race on the final lap, retiring from fifth. Tander was able to finish in second, a strong result off the back of qualifying outside of the top ten on Saturday while Heimgartner took third for the Kelly Racing squad.

Finishing eighth, Brown took the championship as his remaining rival in O’Keeffe struggled throughout the race, finishing eleventh. Though not officially the champion, Brown’s points tally cannot be passed and he will go to The Bend on November 15-17th with no pressure for the championship.