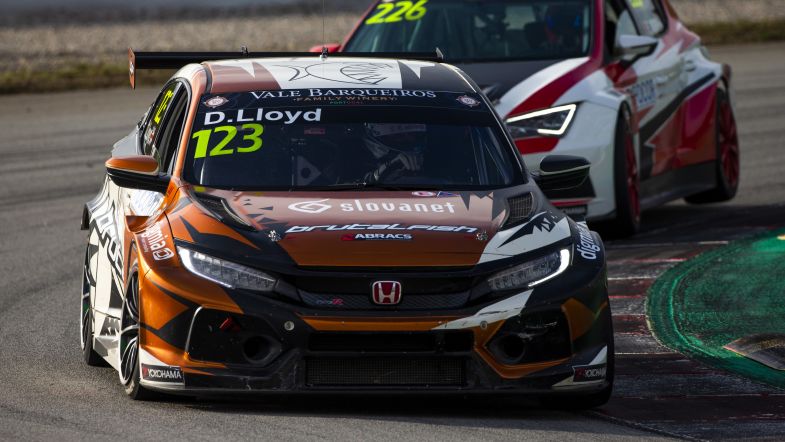 Brutal Fish Racing’s Dan Lloyd withstood race-long pressure from Gilles Magbus to take his second TCR Europe series victory of the year in the final race of the weekend at Barcelona.

Lloyd converted reversed grid pole into the lead at the first corner and beat Magnus’s Comtoyou Racing Audi RS 3 LMS to the flag by little over half a second.

Files maintains a healthy championship margin of 48 points over Briché heading into the final round of the year at Monza next month.

Despite a delayed start, caused by Abdulla Ali Al-Khalefi crashing his Cupra into the pit wall on the formation lap, Lloyd made a strong getaway off the line and fended off Magnus into Turn 1.

The safety car was then called at the end of the first lap to recover the stopped cars of Gilles Colombani and Gustavo Moura.

Lloyd executed the restart perfectly but was chased hard by Magnus’ Audi, who close to within four-tenths of a second.

But Magnus never truly threatened the lead despite getting a good slipstream out of the final corner with two laps remaining. The Belgian subsequently had to settle for second, albeit comfortably ahead of Briché’s Peugeot 308TCR.

On-the-road winner in Race 1 Briché started eighth on the grid but made inroads into the field at the start. He then profited from an audacious lunge from the WRT Audi RS 3 LMS of Santiago Urrutia on Tom Coronel’s Honda Civic Type R FK8 into Turn 10 to jump to fourth.

Urrutia lost out to Coronel off the line, despite briefly making it back past the Dutchman into Turn 1. Urrutia then made a late dive down the inside of Coronel as the pair entered Turn 10, but locked up and took both wide.

Briché, now past both of them, set his sights on the Vukovic Motorsport Renault Megane of Jack Young before making his move on the Northern Irishman for third on the entry to Turn 4.

Behind Young came Files, who made up for a time penalty received in yesterday’s opening race, to bag valuable points for his title assault.

Nelson Panciatici came home sixth for M Racing, after a hectic battle for the lower top ten, which involved no fewer than six cars.

He headed Coronel and Dominik Baumann, while the third Target Competition Hyundai i30 N TCR of Andreas Bäckman finished tenth.

He first came to grief when trying to pass Coronel for fifth at the final chicane, but the pair made contact and Coronel was forced wide.

He then appeared to push Bäckman off track on the exit of Turn 1 while trying to hold onto his position.