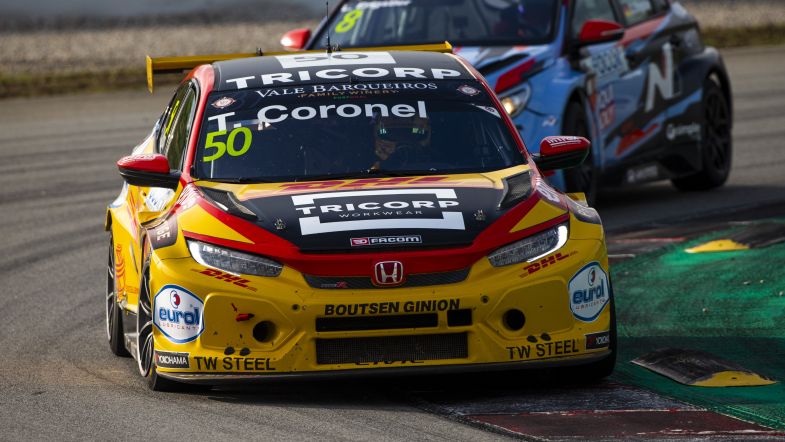 Engine issues might see Tom Coronel out from Monza finale

Boutsen Ginion Racing driver Tom Coronel says it is touch and go whether he will compete at the final TCR Europe series round at Monza next month, after identifying engine issues at Barcelona.

Coronel finished sixth in the opening race of the weekend before battling to eighth in Race 2 in his Honda Civic Type R FK8 TCR.

The Dutchman was forced to defend heavily throughout the second race after encountering higher than normal oil temperatures, which he says may affect his Monza participating should an engine change be required.

“I was having fun by defending, but we just checked the oil temperature, which was 20 degrees hotter than Lloyd’s and my water temperature 10 degrees, so we have a problem,” Coronel told TouringCarTimes.

“My engine is getting is too hot. Yesterday the oil was only 134, but now it was 141. Too much friction in the engine.

“It depends if I need to change the engine, whether we will go to Monza. If we have to, then it will be for what? To be at the back of the grid for the races?

“So that I’m not a fan of, so let’s wait and see. But we need to have a look at the engine first, for me it seems like it is dying.”

Coronel ran strongly inside the top five early on in Race 2 but lost time after Santiago Urrutia’s overtaking attempt forced him wide at Turn 10.

He was then hit by the M1RA Hyundai i30 N TCR of Luca Engstler at the chicane, but managed to bring the car home in the points.

“After three laps I got difficulties, like yesterday. The water and oil temperature was too hot, even now when it went completely crazy, the engine temperature went to about 140 degrees. The power was down and all I could was drive clever and defend, which worked out quite well.

“There were some guys out there making some beginner moves, not clever. I saw the one from Urrutia coming, he just gets too hot and I looked in my mirrors and thought ‘come on guys, you know this is not going to work’.

“And then with Baumann on the last lap, if I had not opened the steering, he would have t-boned me.”