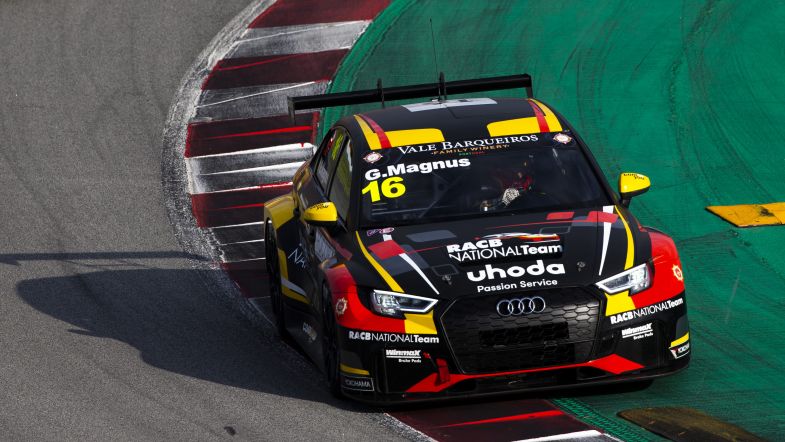 Comtoyou Racing’s Gilles Magnus says he is relieved to “finally be back in the points” after coming a close second place to Dan Lloyd in the second TCR Europe series race at Barcelona.

The Audi RS 3 LMS driver had topped the first practice session on Friday and harboured high hopes of a strong weekend.

But Magnus only managed ninth in qualifying on Saturday, before retiring from the opening race when his power steering failed heading into Turn 1 after the safety car restart.

Second place to Lloyd on Sunday however allowed Magnus to concentrate himself on finishing the year off on a positive at Monza, another circuit to suit the Audi.

“I felt I definitely had the speed to take the win today, but maybe after such a disappointing last two races I just wanted to finish. Even if it was P2, it was better to finish and take the points for the championship.

“We can be relieved to end the weekend on a high, after all the shit we’ve had this year thanks to technical problems and some mistakes on my part as well.

“We’re back in the positive circle ahead of Monza now.”

Magnus followed Lloyd in the early stages and briefly showed his nose under braking for Turn 1. The Belgian former single seater driver admitted that he struggled to gain enough traction out of the slow corners to mount a serious attack.

He said: “It was obvious that the straight line speed [of my car] was much better but he defended really well and he covered the inside line well so it was difficult.

“Then the traction of the Honda is very good so the exits of Turn 14 was way too good to be able to pass him.

“I knew if he was smart enough to cover the inside like he did, it was impossible to pass, but I’m sure our speed was better.”

The Audi was the car to beat at Monza in 2018, with WRT’s Jean-Karl Vernay claiming a double victory. Magnus is confident his car will maintain an advantage but is coy on setting any expectations.

“We’re feeling very confident going into the last round, we all know that this will be Audi’s weekend,” Magnus said.

“After all the downs this weekend, I am looking forward to this weekend and I hope we can end the championship on a high and take some strong points.

“I’m always looking for a victory and maybe at Monza our chance will be bigger, but let’s not forget that the Hyundai has proved its top speed a lot, so I think the difference won’t as it was in 2018 as we saw with Jean-Karl Vernay.

“We will have an advantage but it won’t be as big as last year, so we’re not saying we’ll win both races there, we need to see after qualifying how well the pace is.”