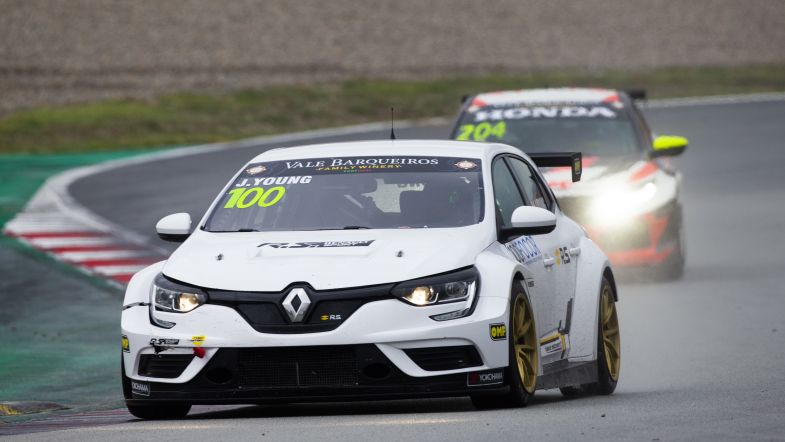 TCR Europe series newcomer Jack Young has hailed his debut weekend in the series as “amazing” after claiming a pair of fourth place finishes at Barcelona.

He then kept it clean in each of the two races to claim a season’s best for the Renault in TCR Europe, finishing just off the podium.

“It’s been an amazing weekend to be honest, I never expected it to go this well,” Young told TouringCarTimes.

“Before the weekend I was aiming to get into the top ten, but we’ve come away with two top fives instead, so I’m very happy with how it’s gone.”

Teenager Young has had a busy month so far, having competed in the Clio Cup at Knockhill the week before, taking a win and a second place.

The Northern Irishman will return to school for three days this week before heading to Silverstone for the penultimate round of the National championship with increased optimism following his maiden visit to Barcelona.

“It’s definitely been a busy time for me recently,” Young said.

“We basically came straight here from Knockhill, did this round and then I’ll be off to Silverstone on Thursday. Every weekend seems to be a race weekend, so it’s great that we were able to get some good results this weekend.”

Young achieved his fourth places despite having only tested the Megane TCR once prior to the Barcelona weekend.

And following a successful debut, Young is also keen to gain more experience in the category as he assesses his racing options for 2020.

“We need to look at what the options are for next year, but I had a great time learning and racing the car so it would be nice to have another go in a TCR championship soon,” Young added.

“I only got one day of testing in the car before this weekend and we’d never driven it in the wet, so Saturday qualifying was a bit tricky.

“Budget always controls things so we’ll see what we can do for next year, but I would definitely want to get out in one of these cars again.”