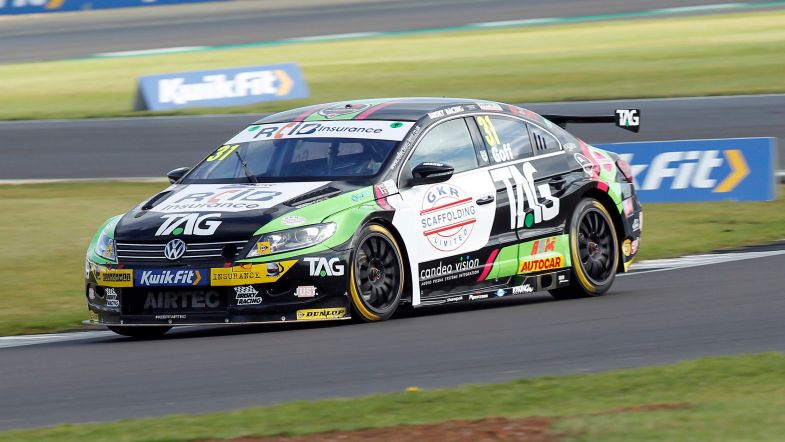 Jack Goff secured a first win for Team HARD after an astonishing final race of the weekend at Silverstone set up a five-way showdown for the BTCC title.

The arrival of rain as the race got underway let to a number of drivers taking the decision to pit for wet tyres as the action panned out, with a battle developing between those who were braving it on slicks and those who were trying to come through the pack as the conditions worsened.

Goff had pitted at the end of the green flag lap to switch to wet rubber and it would prove to be the critical moment of the race after an early safety car period caused by Matt Simpson going off into the barriers.

As others pitted for wets and those on slicks started to drop back, Goff found himself charging through the field along with the Infiniti of Aiden Moffat, with the pair get up into the top two places – even with Moffat spinning at Copse.

Goff would ultimately end up more than seven seconds clear of Moffat at the finish, with Matt Neal taking third in his Honda Civic having admitted that he was a lap too late in making the call to switch – his stop coming just too late to join the rear of the train behind the safety car.

Those who had pitted for wets would ultimately fill the top ten places, with Tom Oliphant taking fourth from Tom Chilton, and Jason Plato rounding out the top six.

Colin Turkington took seventh and would be best placed of the championship contenders, despite a trip across the grass whilst fighting for position with fellow BMW man Andrew Jordan.

Jordan followed him home in eighth to remain third in the standings, with Michael Crees and Bobby Thompson rounding out the top ten.

Jake Hill would be best placed of the drivers on slick tyres in eleventh place just ahead of Dan Cammish, who remains second in the standings by virtue of his twelfth place finish.

Cammish was lucky to survive contact with Josh Cook at Copse that damaged the suspension on the BTC Racing Honda, which had led much of the race on slick tyres.

Cook will retain a chance of the title at Brands Hatch, and also leads the Independents standings from Rory Butcher – the latter holding a slender lead in the Jack Sears Trophy race.