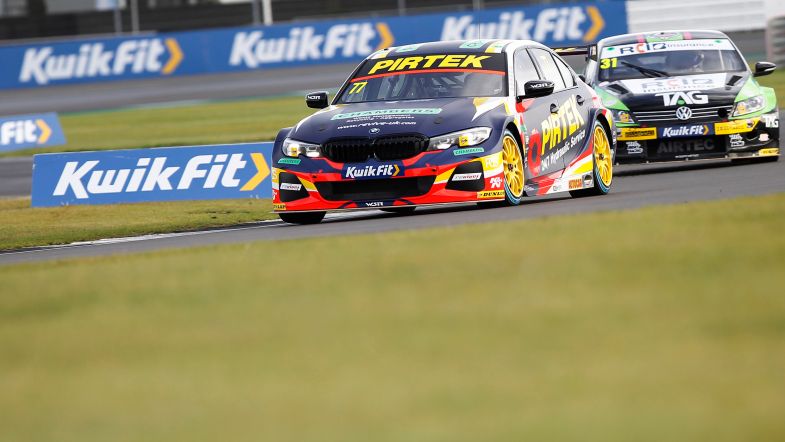 Andrew Jordan “still in the mix” after tense weekend

Andrew Jordan said he was pleased to remain in the mix for the BTCC title after a “tense” weekend on track at Silverstone.

The WSR driver went into the penultimate meeting of the campaign looking to close down the ten point gap to Colin Turkington in the standings.

Whilst he could only qualify down in 14th place after being unable to get a tow, Jordan raced to tenth place in race one after picking up a penalty for a move on Tom Chilton – taking six points out of Turkington after he suffered a spin.

However, Jordan was then at the centre of one of the main talking points of the weekend in race two when he clashed with Dan Cammish behind the safety car after confusion over which driver had been ahead when the race went under caution.

Ultimately ending that race in eighth spot when it was called early due to rain, Jordan then picked up eighth once again in race two having switched to wet tyres and will go into the season finale 17 points off the championship lead.

“To come back from qualifying to get what we did from the races was a pretty good job, because it would have been very easy to throw the championship away on a weekend like this with the conditions we have faced,” he said.

“It’s one of those weekends that is good for the spectators watching on but I think it’s probably been a bit tense at times for WSR. I’m racing Colin as hard as I’ll race anyone else and he is doing the same. During the season you give a bit more room as team-mates but there is a championship at stake now. That was hard racing between us in race three but we didn’t turn each around – it was just hard.

“What happened in race two however with Dan was disappointing as there was no need for contact behind the safety car. I saw the yellow flags at Woodcote and I was ahead, which is clearly backed up by the TV footage. I’ve seen his onboard and he’s lost his head. We were all line astern until he came alongside me and I think it sets a bad example. You shouldn’t do that.

“Going to Brands Hatch it is still all to play for. When I won the title, I lost 27 points to the guys behind at the final round so it certainly isn’t over, and having stayed right in the mix, I’m going there with one goal.”