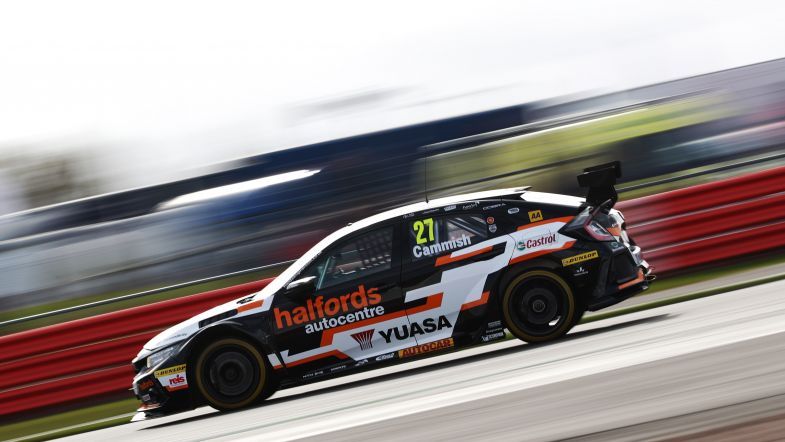 Dan Cammish admitted to feeling “deflated” at the end of race day at Silverstone despite moving up into second place in the race for the BTCC title.

The Team Dynamics man secured a podium finish for the seventh successive race meeting to jump ahead of Andrew Jordan in the standings and is now the closest challenger to Colin Turkington going into the season finale at Brands Hatch later this month.

The podium result came in the second race of the weekend, and only after a controversial incident behind the safety car with Jordan that left the pair with differing views on what had taken place.

“I feel a bit deflated to be honest as it hasn’t been a nice day,” he said. “Of course I’m happy to be second in the standings, but it could have gone better and the incident in race two with Andrew was farcical.

“I don’t really know what to say about it to be honest. I was told it was my position and that I had to hold position and he didn’t. He drove round for two laps side-by-side and it was all just nonsense. I think desperation started to show through a bit, and it’s a real shame that it all happened.”

Either side of the podium finish, Cammish picked up finishes of eleventh and twelfth from two races he admitted had been far from straightforward thanks to the ballast he was forced to carry into the weekend, and the changeable weather conditions on track.

“The weight hurt in race one and I got bullied a little bit,” he said. “I think I put too much thought into the bigger picture in that one and that is when things happen, like with Colin when he got turned around. You have to be careful and decide how much aggression to show with drivers who aren’t in the championship mix.

“In race three, we were in different league early on before the safety car came out. I think BMW had to pit as their hands were tied with the weather but when they pitted, my hands were tied too. I was screwed then because if I pitted, I’d lose track position so we had to stick it out and to get twelfth was a good result.”

The race three result came after Cammish survived side-by-side contact at Copse with Josh Cook that damaged the suspension on the BTC Racing Honda, with Cammish insisting there was nothing he could have done to avoid it.

“I’m not sure what happened with Josh,” he said. “He blamed me which he is entitled to do, but from my view, he was trying to pass me on the inside and he dropped it, so I’m not sure how I can be at fault for that.

“It’s been one of those days that wasn’t smooth or clean for any of us, but we’re not down or out. I got two wins at Brands Hatch last year and I go there with everything to gain and nothing to lose in terms of the title.”