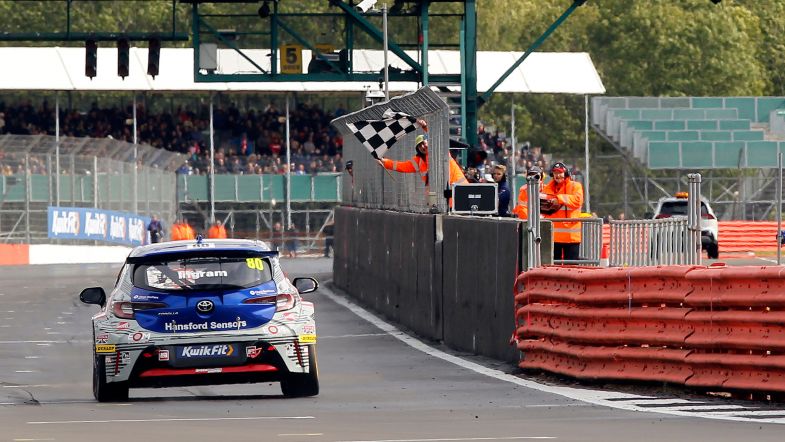 Tom Ingram said he was delighted with his success on track at Silverstone after retaining an outside chance of taking the 2019 BTCC title.

Ingram headed into the weekend confident about impressing at the wheel of his Toyota Corolla and came close to securing pole position – having lapped within a tenth of a second of the fastest lap set by Jason Plato.

After fighting ahead of Matt Neal at the start of race one, Ingram quickly got ahead of Plato into a lead he would hold until the finish and then repeated the feat in race two having fought back from losing the lead to Tom Oliphant after a tap from Plato.

Whilst there were no points in race three after contact on track left him off the lead lap after pitting, Ingram was left delighted with to have stayed in contention for the crown thanks to his double victory.

“We were optimistic arriving at Silverstone that we would be on the pace – the Toyota Corolla is just insanely good at these fast circuits – and I was very pleased with the performance of the car throughout free practice and qualifying,” he said.

“We had a lot of quick guys around us on the grid for race one in lighter cars, but I was confident we could hold our own and I love conditions like that. The Corolla felt fantastic and after taking the lead, I was able to control it almost at will.

“It was great to keep our winning run going at Silverstone, and then to repeat the result in the next one – in a totally different kind of race – was just incredible.

“Race three was then just carnage right from the start – a bit of a destruction derby with everybody seemingly wanting a piece of everybody else and all fighting over the same bit of tarmac, and while we were never going to get a result from two laps down, that didn’t detract at all from an amazing weekend.

“Back-to-back wins is a first for us in the BTCC, and full credit must go to the team for such a massive achievement. What a special day!”