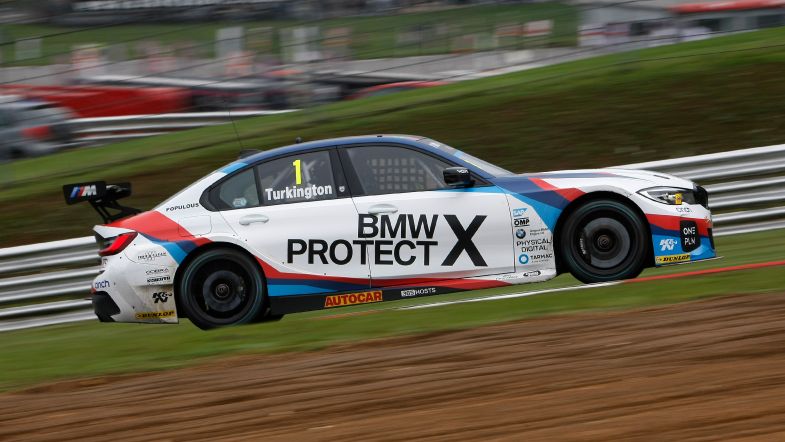 Colin Turkington has added an extra point to his lead in the race for the British Touring Car Championship title after securing pole position for the season finale at Brands Hatch.

With rain falling heavier than it had done at any stage during the two free practice sessions, the majority of the field elected to go for a timed run straightaway rather than diving into the pits to swap tyres.

However, only the three West Surrey Racing-run BMWs and the two Dynamics Hondas had been able to post a timed lap before the red flags were brought out after Matt Simpson – having already run off track at Surtees – then suffered a spin into the gravel at Paddock Hill Bend.

With Simpson’s Honda recovered from the gravel, the action resumed with 25 minutes to go and Turkington immediately lowered his fastest time from 1:43.278 down to 1:41.681 – putting him seventh tenths clear of team-mate Tom Oliphant and Andrew Jordan as the three BMWs took the early advantage.

Turkington then improved yet further on his second timed run to extend his advantage to more than a second before Ash Sutton and Matt Neal managed to get in amongst the BMWs in second and third.

Despite the ballast on his car, Turkington then became the first driver to dip into the 1:40 bracket, with Sutton and Jordan also improving as the rear-wheel drive cars excelled in the tricky conditions.

Behind the three BMWs and the Subaru, Rory Butcher slotted into fifth in the Cobra Sport AmD Honda Civic Type R as best of the rest ahead of Josh Cook’s newer FK8 Honda as the session entered its final ten minutes.

Heading into the final eight minutes, Jake Hill moved into fifth as the best of the front-wheel drive cars, but all eyes were on the Team Dynamics Honda of Dan Cammish – with the man sitting second in the standings finding himself down in eleventh place.

With little more than five minutes remaining, there was suddenly drama for Jordan as he went off the road and into the tyres at Hawthorns as the rain intensified – becoming stuck in the gravel and bringing out a second red flag.

That meant Jordan was stripped of his best time in the session, although his second quickest lap was only 0.013s slower so he remained third fastest as the field returned to the pits so his Pirtek-backed BMW could be recovered.

The session got back underway with the front-runners having the chance to complete two final flying laps to determine the grid.

With the rain coming down heavier, Turkington aborted his first flying lap after the restart when it became clear that he wouldn’t be able to improve, whilst Cammish had a moment at both Graham Hill Bend and Surtees on his first lap before then going wide at Hawthorns behind Jason Plato’s Vauxhall as he was unable to improve on his time.

Whilst the top four would remain unchanged – as Turkington took pole from Sutton, Jordan and Oliphant – there was a late improvement from Butcher as he climbed up into fifth spot ahead of Hill, with Chris Smiley, Cook, Mike Bushell and Aiden Moffat rounding out the top ten.

Cammish had to settle for twelfth place, with fellow title hopeful Tom Ingram down in 17th spot.

Turkington now takes a 17 point lead into race one on Sunday, which is scheduled for 11:35 local time.