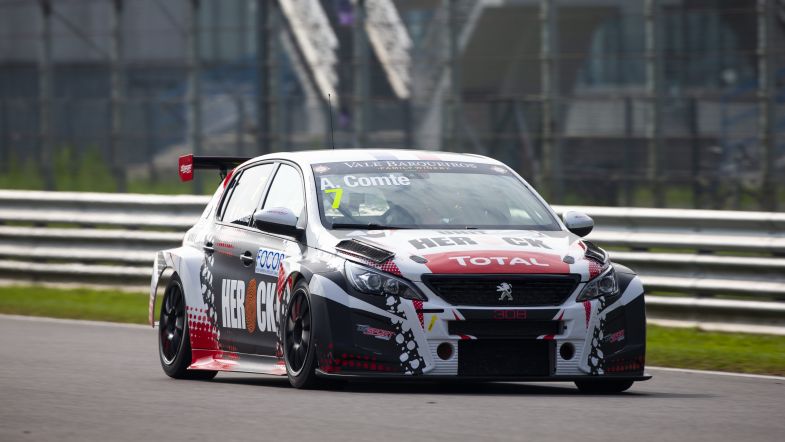 Peugeot drivers Aurélien Comte and Julien Briché have revealed a cross-team qualifying strategy which enabled both drivers to lock out the front row for the penultimate TCR Europe series round at Monza.

Briché and Comte locked out the front-row for today’s penultimate race of the year after each giving the other a tow on the straights, with the former setting the pace by nearly half a second.

In Friday practice, the Target Competition Hyundai i30 N TCRs experimented with a tow strategy, but come qualifying, only Josh Files and Andreas Bäckman made it into Q2.

To counter this in qualifying, the Peugeots elected to work together.

“Yesterday we had a little problem with the brakes, which we were able to resolve today. Then I was able to get a time with a good tow, so it’s very good,” Briché told TouringCarTimes.

“We worked closely with the other Peugeots, so I have to thank Aurélien for the tow he gave me. For me, it was perfect.”

Comte said that a plan had been in place prior to qualifying, and that he and Briché tried to avoid others who were “not playing the game”.

“It was a little complicated because there were some teams who were not playing the game, some others who were. It was a bit like the F1 qualifying,” said Comte.

“So I decided to go out with Julien, and this was sort of the aim before the session started, to help him with the championship. So with us being one and two, it’s not so bad.

“For us, it was well executed, well organised and that helped Julien. I don’t know how it was for the Hyundais, maybe it didn’t work for them so much. It was really the perfect result for Julien, that’s for sure.”

Briché remains more than a race victory behind Files in the championship, but is hopeful he can take the title fight down to the final race of the season tomorrow.

He said: “There is still a 43 point gap between me and Files so it’s still difficult. Nothing is lost yet so we need to have two perfect races. Josh needs to slip up in one of them so it’s still a bit complicated.”

“We have to try and win the first race, we’ll see what Josh is able to do, he’s sensible enough to not get into any trouble and damage his car.

“I hope to get a good start and we’ll see what happens after that.”