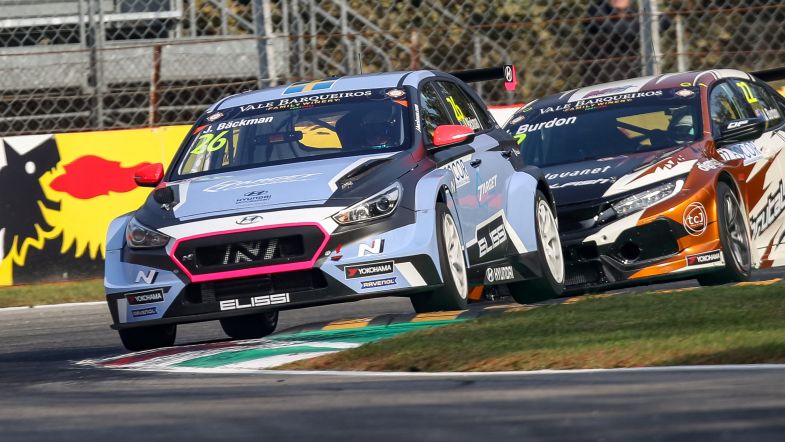 Target Competition siblings Andreas and Jessica Bäckman have put their continuously improving form in the TCR Europe series down to the input of driver coach and title-winning team-mate Josh Files.

The Swedish duo made the step up to the European series after dovetailing campaigns in TCR UK and TCR Scandinavia in 2018 – their first forays into car racing – with each recording podium finishes.

Andreas has claimed two pole positions and one victory, while Jessica bagged a podium finish at Hockenheim, alongside another pair of third places in one-off outings in the Scandinavian and German series.

The pair have been coached by Files since the start of the season, with Andreas in particular noticing a marked change as a result of his team-mate’s input.

“He has been a really big help for me this year because he gave us a feeling that he really wanted to make us better,” said Andreas Bäckman to TouringCarTimes.

“A lot of information was shared with us, which he didn’t need to do. He is always very honest about things with us and we definitely helped us improve over the season.”

Andreas just missed out on finishing third in the championship to WRT’s Santiago Urrutia, but the Hyundai i30 N TCR driver believes he can come back stronger next season.

“I needed to gain one more position in the race, and that would have been enough to get third,” Andreas said.

“But I braked just a little bit too late into the last corner and missed my braking point. At least I gave it everything.’

Andreas’ sister and team-mate Jessica also felt the benefit of having Files’ experience ingrained within the team throughout the year.

“For sure Josh has been helping us a lot ever since the first test. We did some test days when we first arrived at Target in the winter, and he told us a lot about how to drive the car and the circuits, because we had not driven any of them,” Jessica explained.

“He’s a very good driver coach and that has helped us a lot over the year, because otherwise we would not be this good I think.

“It has been a very positive season for me personally, even if the championship position at the end isn’t quite what we wanted. I showed that I can be on the podium, and also be very fast.”