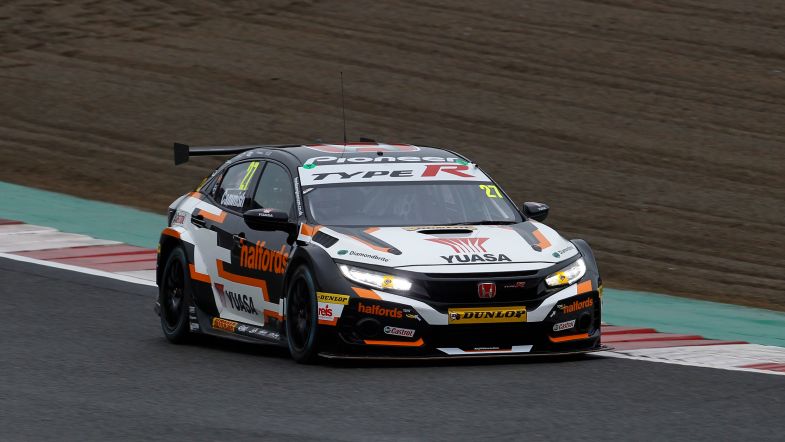 Dan Cammish produced an astonishing drive in tricky conditions to secure victory in the opening race of BTCC Finals Day at Brands Hatch and close to within eight points of the championship lead.

Cammish had started the race down outside the top ten after a difficult qualifying session but stormed through the pack as rain started to fall to secure his second victory of the campaign and take vital points out of Colin Turkington’s advantage.

Turkington had slipped back to second at the start having qualified on pole as Ash Sutton’s Subaru secured the early advantage, but the defending champion battled back into top spot before the Safety Car was deployed after Matt Simpson went off at Paddock Hill Bend.

That left Turkington ahead of Sutton and Rory Butcher under caution, with the Cobra Sport AmD driver and Trade Price Cars Racing’s Jake Hill having both battled ahead of Andrew Jordan’s Pirtek-backed BMW.

Cammish meanwhile had enjoyed a solid start to move up into seventh spot.

Whilst behind the safety car, rain that had been threatening started to fall, with a number of cars running further down the order taking the decision to gamble on a switch to wets just as the action prepared to resume.

The race resumed on lap eleven, with Butcher and Hill immediately jumping ahead of Sutton before Butcher then made a move at Surtees to get ahead of Turkington onto the lead.

As the rear-wheel drive cars then started to struggle in the greasy conditions, Hill then got ahead of Turkington into second and was followed by Cammish; his Honda showing pace in the conditions that no-one else was able to match as he vaulted into the podium positions.

A moment for Hill at Graham Hill Bend on lap 15 allowed Cammish to move into second spot and he quickly chased down Butcher before an astonishing move around the outside at Paddock Hill Bend put the Honda into the lead of the race.

As the rain got heavier, Cammish simply drove away from the pack behind to secure victory but there was a late twist in the tale behind.

Butcher and Turkington looked set to finish on the podium but Matt Neal and Tom Chilton were charging through the field on wet rubber and would pass the pair on the final lap to secure podium places having started down in 13th and 19th on the grid.

It meant Butcher had to settle for fourth place with Turkington fifth, picking up two bonus points for pole and leading a lap.

Mike Bushell took sixth ahead of a wet-shod Stephen Jelley, who demoted Andrew Jordan to eighth on the final lap – a result that leaves him 22 points behind.

Jack Goff and Ollie Jackson rounded out the top ten.

The championship challenge of both Josh Cook and Tom Ingram came to an end, with Cook suffering a moment on the GP loop before retiring late on and Ingram failing to score after pitting in the closing stages.

Cook’s failure to score also means his lead in the Independents’ title race has been cut to five by Butcher, with the Scot extending his lead in the Jack Sears Trophy over Tom Oliphant to 16.