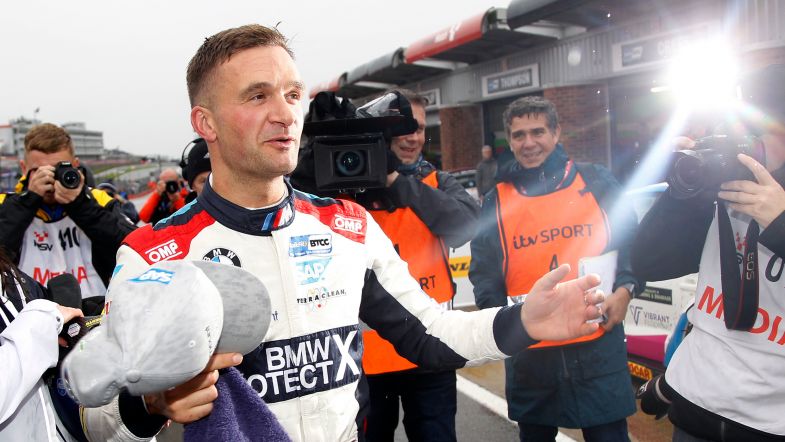 Jason Plato secured victory in the final BTCC race of the season at Brands Hatch but it was Colin Turkington who emerged with the most astonishing of championship titles.

Plato’s victory came after he was able to battle ahead of Stephen Jelley’s BMW but the focus was firmly on the battle for the championship behind as Turkington went up against Dan Cammish and Andrew Jordan for the crown.

Early on, Cammish was in the box seat in the fight despite slipping behind Jordan at the start, with the Pirtek Racing-backed man aware that he needed to get up into the top three to push for the title.

Jordan was able to continue making up places to get up into fifth spot as Cammish found himself boxed up behind the Ford Focus of Ollie Jackson – a fact which allowed Turkington to close in as he stormed through the pack from 25th on the grid.

By lap twelve, Turkington had managed to get ahead of Cammish to run seventh and then made a move for sixth on Jackson but it was still set to be Cammish who took the title before he suddenly went off at Hawthorns and into the tyres.

That suddenly swung the championship back to Turkington, with the ten points for sixth place being enough to put him two points clear of Cammish in the standings.

It also left Jordan needing a podium to secure the title himself.

As Plato took the flag ahead of Rory Butcher, who wrapped up the Independents’ title, Ash Sutton held on for third place with fourth for Jordan meaning he took second in the standings from Cammish by virtue of more race wins.

Josh Cook took fifth ahead of Turkington, Ingram and Jackson, with the top ten rounded out by Adam Morgan and Tom Oliphant.