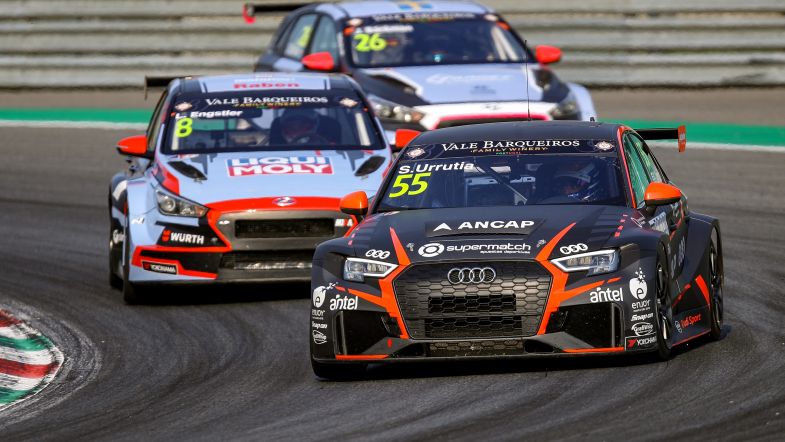 Urrutia beat the Target Competition Hyundai i30 N TCR of Andreas Bäckman to the position after the latter slid off track on the final lap in Race 2.

The Uruguayan labelled his turnaround in form after a difficult weekend at the Red Bull Ring earlier in the season as the catalyst for a strong end to the season, after which he is aiming a step up to the World Touring Car Cup for 2020.

“It’s been an up-and-down season for me this year, but it’s been such an amazing season,” Urrutia told TouringCarTimes.

“Rookie champion, best Audi driver and third in the points, I think it’s something I have to be happy about.

“The start of the year was a bit tricky for me as I had to get used to the car and the front-wheel drive, but after a shit weekend at the Red Bull Ring, we turned things around and we have been very quick.

“I’m super happy with myself, for the team and my sponsors. We’ve finished the season on a high and I hope to make the step up to WTCR for next season.”

Urrutia made the switch to touring cars for this season after a successful two seasons in the Indycar Series feeder category Indy Lights.

A lack of budget forced him to look elsewhere, with the move to TCR Europe a deliberate effort to form a racing career.

Urrutia still believes he has more to give, but is happy with his progress over his debut season in the championship.

“It’s been a difficult transition to touring cars as we didn’t have the budget to test before the season started, so we arrived in Budapest with limited mileage,” he continued.

“Then I had to get used to how this car behaves, it’s very different to a formula car. But right now, I have fun driving the car and for sure I have a lot to improve still.

“But the second part of the year has been getting better and better, and I hope this can continue for next season as well.”