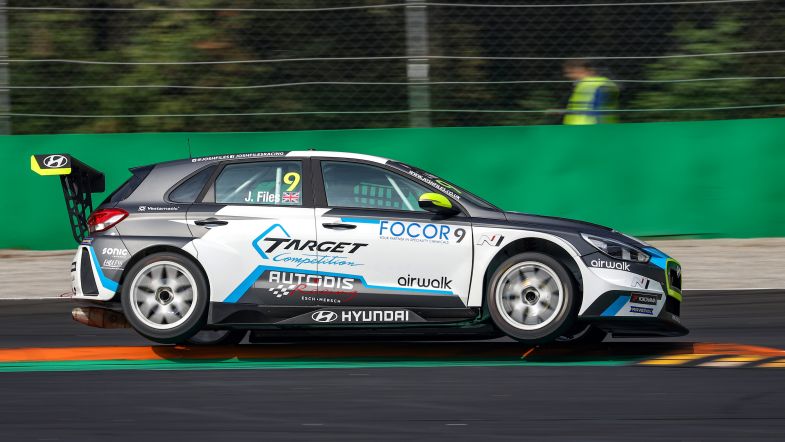 Target Competition’s Josh Files has hailed a “mega year” after claiming his maiden TCR Europe series title with victory in the final race of the season at Monza.

Files started the race from second and got the jump on pole-sitter Maxime Potty to lead every lap, holding off a charging Julien Briché to wrap up the title in style.

Speaking post-race to TCR Europe, the newly crowned champion said: “I don’t think it has actually sunk in yet. I knew we had good pace, but Julien was hounding me all race and was definitely faster.

“But I managed to get the gap at the start and it was enough in the end. The Target boys have worked so hard all year, trying to get this car the fastest as possible.

“It’s been a mega season, not just for me but for everyone. I couldn’t be happier.”

Files came into the final race with a 33-point cushion over main title rival Briché, knowing that a win or a second place for the Frenchman and a non-finish for Files stood in the way of the championship.

Briché made it up to second place by the end, with Files eager to avoids any late-race drama.

“I knew that Julien had the fastest car all weekend, and he was going to come through,” Files told TouringCarTimes.

“If I could make it to third from ninth, he was always going to come through to somewhere on the podium.

“I was pushing like crazy at the start, Dan was very fast and he kept me honest. But I was also trying to maintain my pace because I knew if there was a late safety car, I had to keep some tyres for the end.

“I just kept going and getting information from the team at the end and thankfully Julien didn’t have enough tyres at the end.

Files also explained how he was able to successfully break the tow of Briché and keep the Frenchman behind until the flag.

“It’s great because for all the fans and the championship, it was kept alive until the last corner of the last race, it’s absolutely brilliant. It’s a great way to end the season.

“I had to keep on looking forwards, anything could have happened in those last laps. I tried to go through Ascari as quickly as possible to stop any tow because on that last straight, the tow is so effective.

“Target Competition has been so great this season. The Hyundai has been amazing and this is a credit to them.”