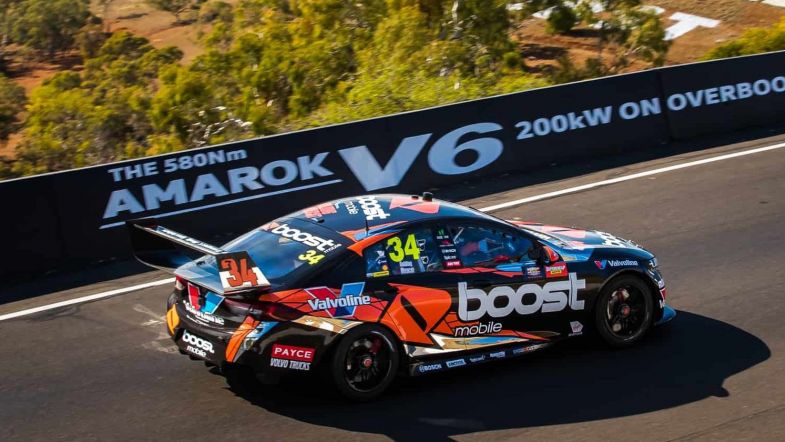 Outspoken CEO of Boost Mobile, Peter Adderton, has released a statement saying he is willing to contribute money to help fund the implementation of a control upright in the Supercars Championship.

The statement comes off the back of reports on Saturday where Adderton threatened to leave the sport as a sponsor, forcing Garry Rogers Motorsport, who run Boost Mobile as a title sponsor, to pull out of the category in 2020.

Adderton claimed a control upright, which is in place to be implemented in 2021, would be the final piece in the puzzle towards ensuring mechanical parity across the Supercars field as the series looks to move towards utilising control dampers next year.

A major player in the formation of the now defunct two litre/Super Touring Championship in the 1990’s, Adderton has been a consistent sponsor in Supercars for a number of years and claims the move towards a control upright will make for a fairer game.

“We are prepared to sit with Supercars and look at potentially funding the uprights for all cars,” he said.

“It is an imperative to even up the playing field at a time when we should all be looking to make racing better across the board.

“Were it not for incidents at yesterday’s race, the factory teams would have lapped the rest of the field, largely in part due to technical advantage.

“This is simply not good for the sport we care about, and I don’t understand why they’re willing to have consistency across the engine, rear end, damper, tyres, aero and centre of gravity, but when it comes to the upright, all the manufacturing teams goes quiet.

“We want the sport to be the overall winner here, it is full of amazing drivers throughout the field who aren’t showing their talent because the cars are fundamentally not equal.

“The upright looks to be the last thing that the teams can tweak, where you can invest a lot of money and get an advantage.”

The CEO added that he wants to bring forwards the changes not only for the benefit of his own team but for the field in general, increasing the competitiveness across the field.

“This is not about giving the Boost Mobile Racing Team an advantage,” he said.

“We are fighting for everyone else. We have spoken to most people on pit lane, and consensus is that this needs to happen and would be a great step forward for parity. Nobody is willing to say it and do it, we will take the hit for the betterment of the sport.

“That uprights need to be a controlled experience, not for 2021, for 2020, especially if we are willing to essentially invest in the sport to help deliver this.

“I want the best driver on the day to win the race.

“I don’t want the best driver on the day to finish at the tail end of the field because of the huge disparity being allowed from a technical perspective such that he was never going to get close to the top of the field.

“I’d love to see 15 cars coming down the final straight banging doors, and if our car is 15th after that, I’m fine with it.”

GRM’s two young drivers both sit outside of the top 15 in the points standings with James Golding in 18th and Richie Stanaway in 24th while they finished line astern in yesterday’s Bathurst 1000, coming home in 12th and 13th respectively.