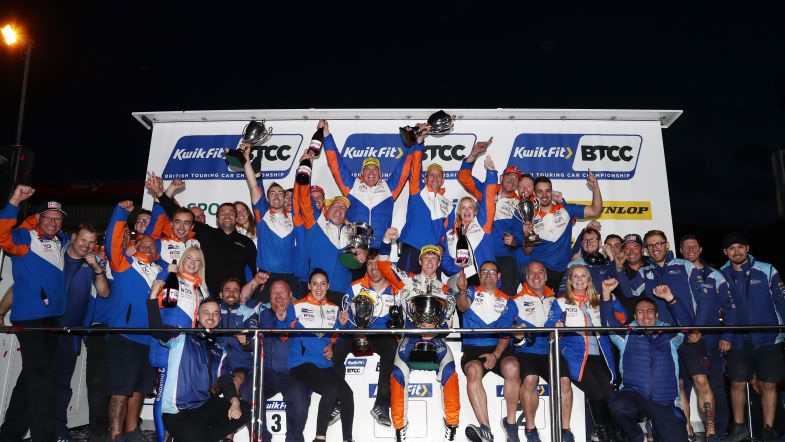 Rory Butcher admitted that it was “hard to believe” what the Cobra Sport AmD team had achieved in the 2019 BTCC season after wrapping up three championship titles at Brands Hatch.

Having qualified as best front-wheel drive car for race one, Butcher only missed out on a podium on the final lap as cars that had switched to wet tyres as rain started to fall came through the field, with the Scot then taking ninth in race three – wrapping up the JST when his only rival Tom Oliphant retired.

A single point behind Cook in the Indy standings going into race three, Butcher had to push hard to keep his fellow Honda racer at bay but second overall behind Jason Plato was enough to secure the championship crown in only his second full season in the series.

“I think being the chaser for the Independent title was the best thing for me coming into the weekend, as every race I just pushed hard to get as much as I could from it,” he said. “I knew in race three that Josh would drive his socks off in the early laps to get to me and I had to drive at 100 per cent from the start. That was the hardest I’ve driven the car all year – it was to the maximum.

“To come away from the weekend with the Independent title and the Jack Sears Trophy for me personally, and to finish in the top five overall, is absolutely fantastic and I think it will take some time to sink in. It’s hard to believe what we have achieved.

“For the team to also win the Independent Teams’ title and finish third overall is brilliant, and you can see in the eyes of the guys in the team just how much it means to them. I’m so pleased to be part of this team and to have had this opportunity, and I’m also happy for all of my sponsors and for the team sponsors who have made it possible.”