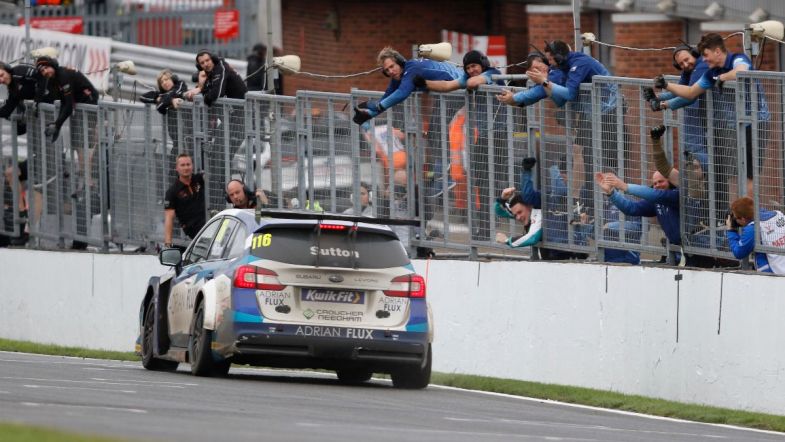 Ash Sutton admitted he was delighted to secure a final victory for the Subaru Levorg after the curtain came down on the 2019 BTCC season, and BMR’s deal with the Japanese marque, at Brands Hatch.

The season finale marked the final meeting of BMR’s four-year deal to run the works Subaru programme, with Sutton heading into the weekend keen to try and secure a final victory for the car – and to ensure that he didn’t complete the campaign without a trip to the top step of the podium.

Having qualified on the front row, Sutton was powerless to slip back to eleventh in the wet conditions of race one, but them romped through the field in race two to secure an impressive victory.

A podium finish in race three capped a strong finale for the 2017 champion to leave him eighth in the championship standings, and he admitted it was great to end the year on a high.

“It’s been a tough season so it is fantastic to round out the year with a win and some more silverware – the team have worked tirelessly throughout so it is a great reward for them all,” he said. “I was going into the finale wanting to win a race and that is exactly what we achieved!

“We knew we would be strong after qualifying but the weather didn’t help us in race one. In race two though the car was hooked up as soon as the lights went out; I was into third by lap one and then it was just about picking my moments to take the lead.

“Once I got out front it was relatively easy and I can dictate the pace, look after the tyres and bring it home. To finish third in the final race is the cherry on top and the perfect way to sign off 2019.

“It has been no secret that this year has been a frustrating one but we’ve kept pushing and reaped the rewards. It felt great to be in the fight on Sunday! It will be nice to relax for a little while, hit the reset button and then I’ll begin plotting for next year.”

Having debuted back in 2016, the Levorg turned out to be one of the most successful cars of the NGTC era, with a total of 21 wins putting it fifth on the list behind the BMW 125i M Sport, the Honda Civic and Civic Type R FK2, and the MG6 GT. The rear-wheel drive car also ended up with 55 podium finishes, once again leaving it fifth on the all-time NGTC list.

Despite the end of the factory programme, BMR could have elected to continue with the car into 2020, but the team has struggled to match the success of 2017 – where Sutton secured the title – in recent seasons.

Although Sutton was able to win more races than anyone else last year, the current campaign has proved to be more problematic, with the Levorg struggling for outright performance against the likes of the BMW 330i M Sport and the Honda Civic Type R.

BMR’s plans for 2020 are set to be revealed in the near future.