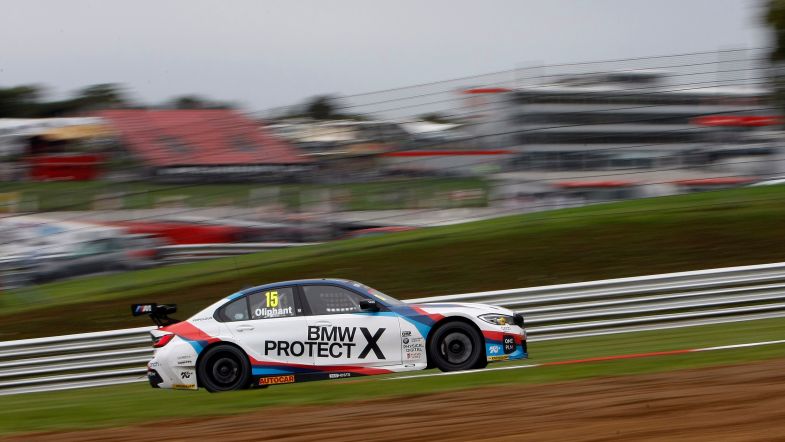 Tom Oliphant says he is excited about what the future holds after brining the curtain down on his first season with West Surrey Racing at Brands Hatch.

Oliphant went into the BTCC season finale with a chance of securing the Jack Sears Trophy, having closed the gap to points leader Rory Butcher at Silverstone.

The 29-year-old out-qualified his rival after securing fourth on the grid but was then hampered by wet conditions in the opening race of the weekend and could only finish back in 16th spot.

Oliphant’s Jack Sears Trophy hopes would be ended at the start of the season race when he was collected by a spinning Jack Goff and forced to retire with heavy rear damage to his BMW 330i M Sport.

The left the second year driver at the back of the grid for race three, but a strong drive through the pack saw him come from last on the grid to tenth place at the finish.

Ending the campaign eleventh in the standings, and having taken his first podium finishes in the series, Oliphant will now hope to take the step forwards to challenge for wins in 2020 when he is set to continue with WSR for a second campaign.

“What a way to end the season! Starting in last place in that final race I had one focus, and that was to give it the full send and see how far forward I could get,” he said. “The car was just unbelievable; the team did a fantastic job to fix it and get me out.

“On the whole it has been a mega first season with WSR and BMW. From the outside you hear about how good they are but to have no experienced it, they really are on another level and what everyone has achieved in quite astonishing.

“To come away with the BTCC Manufacturer/Constructors Championship with a new car and Colin obviously winning the overall title for a fourth year amazing – it has been a really special year and I have to congratulate every single person that has played a part in it.

“Looking ahead, I really think we have laid some good foundations to continue moving forward next year. I’ve had podiums and been a regular in the top ten, so next up is to chase wins and championships – I’m really excited for the future.”