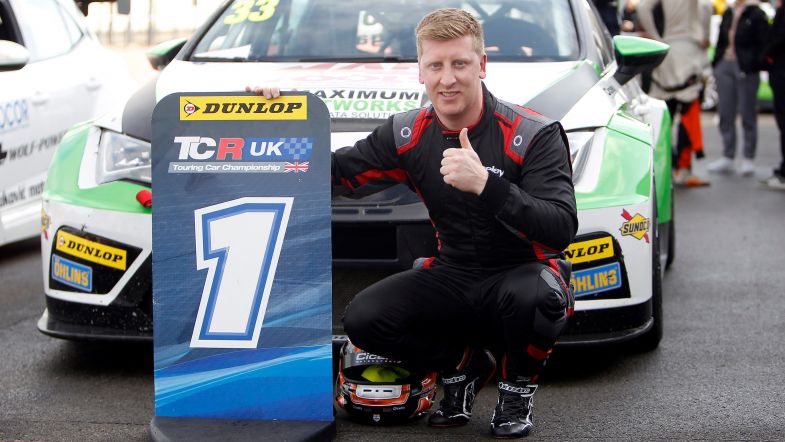 Adam Morgan claimed his maiden TCR UK championship victory in a chaotic penultimate round of the season at Donington Park, as Lewis Kent kept the championship fight alive in third.

Ciceley Motorsport driver Morgan profited from contact between Darelle Wilson’s Vauxhall Astra TCR and the Touring Car Trophy Honda Civic of pole-sitter Henry Neal to take the win over Alex Morgan’s Renault Megan by just over a second at the flag.

TCR UK title contender Lewis Kent produced a superb fightback through the field after going off on the opening lap to take the final step on the podium, as points leader James Turkington lost valuable ground on the last lap and only managed eighth.

Neal got a decent start and fended off Wilson – who was subsequently deemed to have jumped the start – into Redgate.

Further back, Stewart Lines and Paul Taylor came to blows which sent both spinning at the first corner. Kent was also involved in drama on the opening tour, with his Hyundai i30 N TCR taking a trip over the grass between the Old Hairpin and McLeans, along with the NGTC Honda Civic of Will Neal.

Both got going again at the rear of the field, but Neal spun off again, this time at McLeans which brought out the safety car.

Kent used this opportunity to pit to remove a large amount of grass which had filled the Essex and Kent driver’s front grill and radiator.

Henry Neal led away again at the restart but was followed closely by the rapid Wilson.

Wilson then had a go at Neal as the pair exited McLeans on the eighth lap of 17, but the latter misjudged his move and punted Neal off onto the inside grass, leaving the Honda spinning back onto the track at Coppice.

The DW Racing driver immediately took his jump-start penalty, but his move on Neal will also be under investigation.

This allowed Adam Morgan to move into the lead, and the Cupra driver held onto his advantage over namesake Alex until the flag, with the gap never exceeding two seconds.

Meanwhile, Kent’s progress back up the order was sensational and the Hyundai proved one of the fastest cars on the track.

Kent made successive moves on Richard Woods’ S2000 Ford Focus and Darron Lewis’ Team Hard Volkswagen CC at the final chicane, to close onto the back of the top five heading into the closing laps.

Turkington was effectively a sitting duck in the remaining minutes and could do nothing to prevent Kent driving around the outside of the Cupra as the pair came through the Craner Curves wit six minutes to go.

The Northern Irishman also fell behind Lewis on the exit of the Old Hairpin.

All three moved up a position with just two minutes to go as Coggan twice went off in his Volkswagen CC – the first of which, at Coppice, gifted Kent a place on the podium.

Turkington meanwhile, had been comfortable in fourth but fell under attack from Henry Neal on the final lap. Neal put the nose of his Honda Civic down the inside of the Cupra, with Turkington letting him by at the Chicane.

But Turkington was slow on the exit, which gave Wilson fourth in TCR UK, furthering the damage to the former’s points advantage.

Adam Morgan took the win by 1.644 seconds of Alex Morgan at the finish, with Kent a further ten seconds in arrears in third.

Behind Turkington came Woods’s Focus, with the Honda of Nick Halstead rounding out the top 10 in his Honda Civic TCR.

Race 2 at Donington Park is scheduled to take place later on today at 13:45 local time.