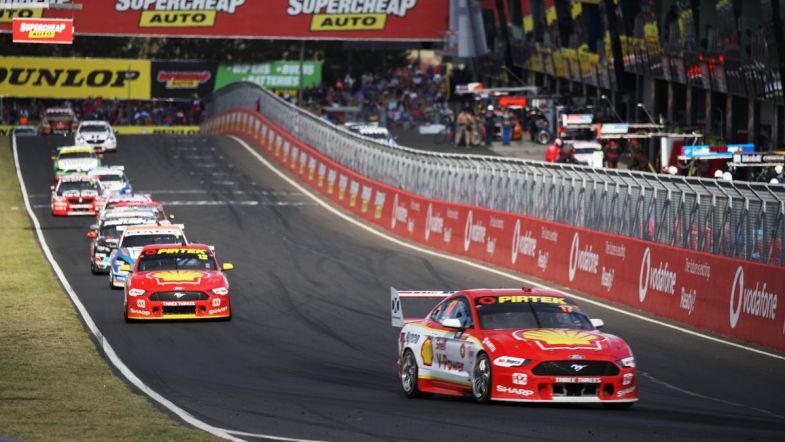 DJR Team Penske has been formally charged and fined for their use of team orders in last weekend’s Bathurst 1000 Supercars Championship race, being hit with a monetary and team points fine.

The championship leading outfit has been handed a $250,000 fine, $100,000 of which is suspended until the end of 2021, and docked a total of 420 team’s championship points after telling Fabian Coulthard to excessively slow down under a safety car period.

Though Coulthard claimed after the race that he was only doing what he was told, he has been moved to the rear of the pack and the last of the finishers classified, now ending up 21st in the Great Race with co-driver Tony D’Alberto.

Coulthard’s demotion in places combined with the 300 points stripped from the team means the Ford outfit didn’t score any teams points in the race though Scott McLaughlin and Alexandre Premat, driving the team’s #17 car, keep their maiden Bathurst 1000 victory.

The suspended portion of the monetary fine is held on the condition that DJR Team Penske doesn’t breach Appendix B of the FIA International Sporting Code or Rules B6.5.4,(Conduct Prejudicial) or D24 (Team Orders) of the Supercars Operations Manual before the 31st of December 2021.

Coulthard now drops down from third to fourth in the driver’s standings, 46 points behind Tickford Racing’s Chaz Mostert (who was promoted from 16th to 15th in the race), 285 behind Triple Eight’s Shane van Gisbergen and 907 adrift of team-mate McLaughlin.

Below reads the steward’s statement on the penalty handed down to the team.

“We are prepared to assume that there was no intention to advantage Car #17, however, it defies belief that the Engineer of Car #12 just happened to have formed a mistaken belief that there was debris at some unknown location on the circuit and that just fortuitously resulted in the very problem anticipated with Car #12 being resolved.

“We find, and it has been admitted, that in giving the direction to the Driver of Car #12, DJRTP infringed the principles of fairness in competition and behaved in an unsportsmanlike manner.

“We do not find that there was an attempt to influence the result of the Race but it is difficult to avoid the conclusion that the result was affected to a degree, certainly for Car #12 that would otherwise have re-joined the circuit after its pit stop in a much lower position.

“We agree with the DRD that, putting to one side other components of the recommended Penalty, a substantial Fine is called for, not the least as a deterrent to all other Teams from engaging in similar conduct.

“We are willing to suspend part of that Fine only because we have never had cause to sanction DJRTP for any unsportsmanship type breach in the past, DJRTP co-operated fully with the Stewards Inquiry, has co-operated with the DRD’s prosecution of the Charge and has pleaded guilty at the earliest opportunity.

“As indicated above, the Stewards have no power to impose a Points Penalty exceeding 300 Championship Points. We impose that maximum Penalty.

“We also agree with the amendment of the Classifications to demote Car #12 to the final Classified finishing position of 21st which, will mean a consequent loss of further Teams Championship Points for DJRTP (the Provisional Classifications have Car #12 in 6th position).

“It will also mean a loss of Championship Points for the Drivers of Car #12. For the reasons explained above, this is not unfair given that the Driver of Car #12 was to a degree complicit in what occurred.”