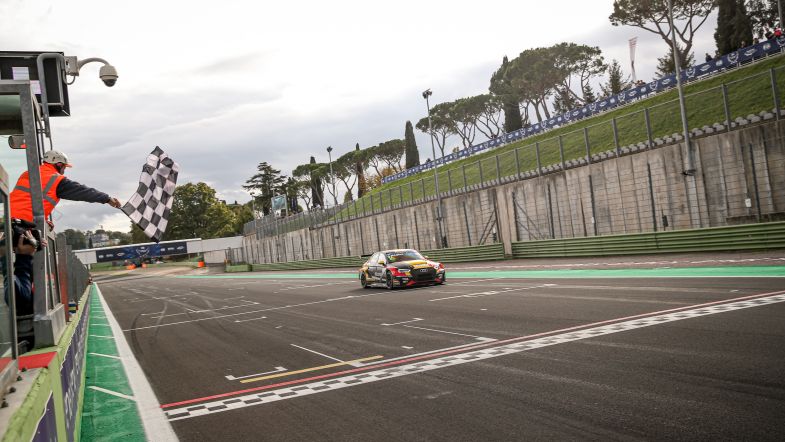 Gilles Magnus admitted that he had to “push like hell” to secure a podium finish in the first Touring Car Cup race of the FIA Motorsport Games at Vallelunga.

The Belgian driver had qualified in eighth place for the opening race in his Audi RS 3 LMS after a tough opening qualifying session, where he had slid off the road before even setting a timed lap in wet conditions.

Having made up two places before the start thanks to penalties for Luca Engstler and Jim Ka To, Magnus endured a tough start to the race after an issue with the handbrake on his car but moved up into fifth spot on the opening lap after a slow-starting Rory Butcher dropped down the order.

A tough fight with Tom Coronel that left the Dutch racer with damaged suspension then saw Magnus move up into fourth before he chased down the Cupra of John Filippi secure a place on the podium finish.

It means Magnus sits ten points off top spot going into race two, where he will start from pole position and more points being available.

“It was definitely a tough race,” he said. “We knew after qualifying that starting from P6 would make it difficult and then my handbrake broke on the grid and I had to manage the start without it, which is complicated.

“I didn’t really recover any positions at the start, but after that I pushed like hell, attacking at every corner, although the guys in front of me were defending well, especially Tom who is not an easy guy to pass.

“I tried my best and now I’ll start race two from the pole, so I’m looking forward to it.”

The clash with Coronel would be one of the main talking points of the race, and resulted in Coronel ultimately finishing down in eighth place having managed to get his Honda Civic Type R TCR to the finish despite damaged suspension.

“P8 was a real pity,” he said. “I had a touch from Magnus and the rear suspension was knocked out, and it meant all the left corners were dodgy. It wasn’t what we expecting from the race, but tomorrow is another day.”