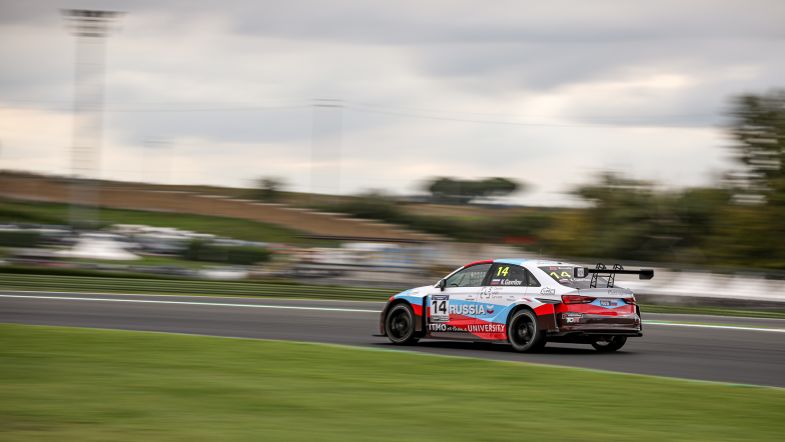 Klim Gavrilov secured victory in the opening Touring Car Cup race at the inaugural FIA Motorsport Games, with a lights-to-flag victory at Vallelunga.

Both Luca Engstler and Gonzalo De Andrés would be missing from the grid at the start after the issues they had faced in qualifying, whilst there was a scare for the Gavrilov at the start when his Audi failed to get away at the start of the green flag lap.

Luckily he was able to get going before too many cars had passed him and took his place at the head of the field waiting for the lights to go out.

Gavrilov made the best start to lead the way from Homola when the action kicked off as Rory Butcher bogged down on the second row in the Team Great Britain MG and would plummet down the order.

Russian driver Gavrilov held the lead through lap one at Homolo gave chase, with Tom Coronel in third under pressure from both John Filippi and Gilles Magnus.

Filippi managed to get ahead right at the start of the second lap and as the two diced for position, Magnus saw a chance to also attack Coronel, with the Dutch driver fighting back to retain fourth before the safety car was deployed to allow the stricken Alfa Romeo of Norwegian driver Kristian Moe Saetheren to be recovered from the side of the circuit.

With the Alfa removed, the action resumed with little more than 16 minutes remaining on the sixth lap, with Homola looking to attack Gavrilov for the lead.

The Russian would set purple secotrs in both the second and third sectors however to quickly establish a lead of near a second at the front, with Coronel putting pressure on Filippi in the fight for third. Behind, Magnus’ Audi and the Hyundai of Czech driver Dušan Kouřil were locking out the top six.

Butcher meanwhile after his wretched start had dropped down to 14th in the MG behind the similar Team China car of Zhen Dong Zhang, and would ultimately retire to the pits.

Coronel’s bid to take third would fall apart at the end of the seventh lap when the Dutch driver suddenly came under pressure from Magnus through the final sector.

Magnus made a move into the final corner but clipped the rear of the Honda, damaging Coronel’s suspension as he swept through into fourth, with Kouřil also getting ahead.

New Zealander Faine Kahia would pass Coronel who soldiered on despite the fact that his Civic Type R TCR was clearly crabbing – with Jessica Bäckman briefly getting ahead before Coronel fought back.

Out front, Gavrilov was building his lead in the Audi, and had moved more than 2.5s clear by the end of the ninth lap, with Homolo under no pressure from Filippi behind.

That was because the French driver had his mirrors full of Magnus’ Audi, with the fight between the pair allowing Kouřil behind to close in to make it a three way battle for the podium.

Magnus would finally get ahead of the Cupra only to then lose the place immediately when the Frenchman fought back. However, when Filippi then had to take a defensive line coming out of the final corner at the end of lap eleven, Magnus was able to get a run and swept through into third.

As the race moved towards its conclusion, Gavrilov continued to extend his advantage at the front, with the main battle in the top ten being over sixth place, as Bäckman – having finally managed to clear Coronel’s Honda – closed onto the rear of Kahia’s Audi.

As the clock hit zero, Bäckman was given one final chance to try and get ahead into sixth on the final lap but Kahia was maintaining a defensive line to keep the Swedish racer at bay.

Gavrilov crossed the line to take honours for Russia and a maximum score with Homola and Magnus rounding out the podium places.

Filippi was a solid fourth for Team France having managed to keep his Cupra ahead of Kouřil, with Kahia rounding out the top six having held off Bäckman’s challenge by just three-tenths of a second.

Coronel somehow held on to secure eighth, with Italian Enrico Bettera and Hong Kong’s Jim Ka To rounding out the top ten; the latter having come from the back of the grid to score.

Having missed the start, Engstler would appear on track late on to check the new engine in his Hyundai, although his chances of securing the inaugural title are already all but over going into race two on Sunday.

That race is scheduled for 13:20 local time.