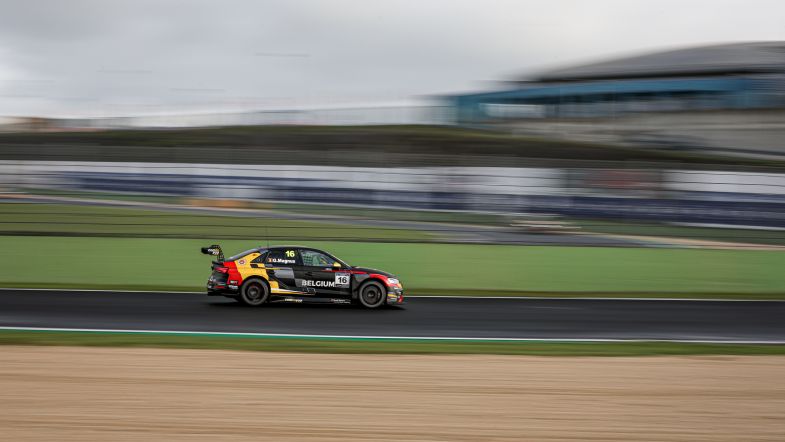 Gilles Magnus converted pole position into victory in the second Touring Car Cup race of the weekend at Vallelunga, but it wasn’t enough to prevent Klim Gavrilov from wrapping up the inaugural title at the FIA Motorsport Games.

The Team Belgium driver had qualified on pole for the second race of the weekend, and went into aware that he needed to try and overhaul a ten point gap to Gavrilov after the Russian teenager secured victory in Saturday’s opening race.

After a delayed start, caused by the Team USA Hyundai of Mason Filippi suffering a spin on the formation lap, Magnus made the ideal start when the lights went out to hold the lead ahead of Gavrilov, with Mat’o Homola jumping up into third after a slow start from Tom Coronel – who also lost out to the fast-starting Audi of Faine Kahia.

However, the race would quickly go behind the safety car after Enrico Bettera failed to get away off the line. His Audi was clipped by the Hyundai of Luca Engstler, putting the two cars out on the spot and leaving both stricken on the start/finish line.

The race would resume with just over 17 minutes remaining, with Magnus remaining out front from Gavrilov and Homolo. Behind however, Kahia ran wide whilst trying to make a move on the Slovakian driver ahead and got onto the grass, with the Audi gaining speed across the grass and flying off into the gravel at turn four having somehow avoided collecting anyone else.

With rain in the air, Coronel made a move around the outside of Homola at the final corner to move up into third whilst Gavrilov survived a wild slide at turn two as he looked to try and chase down Magnus, who had built a handy lead on the restart.

Gavrilov then lost second to Coronel but quickly fought back to reclaim second in what was becoming a huge battle for the runner-up spot. Further back, Rory Butcher in the Team Great Britain MG was making up places in the tricky conditions, to climb into the top eight – having slipped outside the top ten at the start.

As Magnus continued to control the race from the front, Gavrilov slowly started to eek out an advantage over Coronel for second, with Homola slipping back from the podium places. Butcher’s charge meanwhile continued as he slipped ahead of John Filippi’s Cupra into fifth.

Just as things settled down at the front, there was late drama when the second MG of Chinese driver Zhen Dong Zhang slid off into the gravel. The safety car was brought out once again, meaning Magnus’ lead of nearly five seconds was suddenly eradicated as the field closed up behind.

The MG was removed in time for one final lap, with Jessica Bäckman and Jim Ka To making contact whilst dicing for seventh place as the Swedish racer fought her way through.

As Magnus maintained his lead, Gavrilov was under huge pressure from Coronel, knowing he needed to retain second place to take the title.

The pair made contact at turn ten as the Dutch driver tried to get ahead and then again towards the end of the lap. Gavrilov however held on but the fight between the pair gave Homola a chance to attack Coronel, only for the Slovakian to come under pressure from Butcher behind.

As Magnus took the win, Gavrilov somehow held on to second on the run to the line to secure the Touring Car Cup crown ahead of Coronel, with Butcher stealing fourth from Homola having gone round the outside of the final corner in the MG.