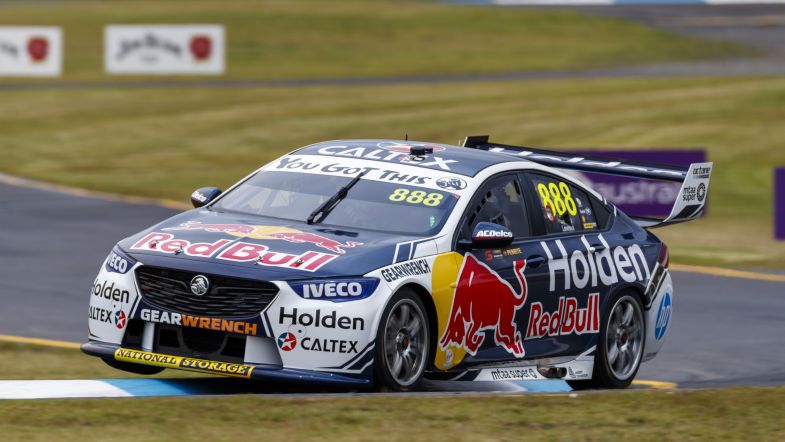 Craig Lowndes won the first Supercars Championship co-driver qualifying race at Sandown ahead of Will Brown, with rain increasing throughout the race.

DJR Team Penske driver Alexandre Premat started from pole position but was beaten to the first corner by Triple Eight Race Engineering’s Lowndes, who kept the lead from then on.

Premat continued to struggle and fell down to finish the race in sixth position.

A man on the move at the start was Lowndes’ team-mate Garth Tander who was able to get past both Premat and Bryce Fullwood into the first corner, jumping from fourth to second.

Erebus Motorsport driver Brown had dropped to fifth position after the opening part of the race but was able to fight back as the conditions got worse. The Holden driver was able to get past Premat and then Fullwood as the Kelly Racing driver spun in spectacular style.

Fullwood was able to recover quickly to finish the race in fourth position.

Brown continued his charge and was able to pass Tander for second position into the first corner, claiming his first ever Supercars podium finish.

Tickford Racing driver Thomas Randle drove a strong race from eleventh on the grid to finish fifth after a late fight with Premat and team-mate James Moffat.

Moffat made a mistake and ran wide into Turn 1 when fighting Premat and Randle. As the Ford Mustang driver returned to the track, he made contact with team-mate Randle. Moffat recovered only to hit the wall at Turn 4 due to suspension damage and had to drive slowly back into the pits to retire.

Lowndes’ victory has handed Jamie Whincup pole position for Race 29, the second 20-lap qualifying race of the day. The result of that race then decides the grid for the 500km race of tomorrow.