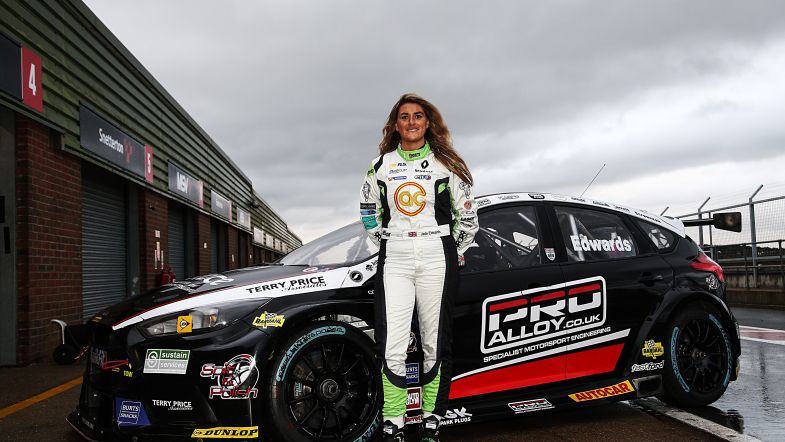 Jade Edwards has made her debut at the wheel of a BTCC car after joining Motorbase for a day of testing at Snetterton.

Edwards, who has spent recent seasons competing in the Renault Clio Cup UK, was invited to take part in the test by Motorbase boss David Bartrum and took to the track in the Ford Focus RS raced this season by Nicolas Hamilton and Michael Caine.

The daughter of former BTCC racer Jim Edwards has made no secret of her desire to move into touring cars in the future and admitted that a taste of the Focus had made her more determined to try and secure a slot on the grid.

“Today has been an amazing opportunity,” she said. “The BTCC is always where I’ve set my sights, even from a young age when I used to watch my Dad compete in the championship. To be given a chance to have a proper go in one ahead of 2020 is something I’ll never forget. I can’t thank David and the Motorbase team enough.

“My career in the Clio Cup was positive but tough at times. It’s refreshing to know that the right people see through the struggles and just pay attention to important factors.

“I’ve driven similar cars in the past, but without doubt, the NGTC Focus has been a career high-point for me so far. Michael [Caine] and the team were a great help today and made sure that I got the best out of the test.

“For sure, today has just spurred me on, even more, to push harder than ever to make it to the BTCC grid. I’ve had an unbelievable response over the years with my 9For9 initiative and I’ve managed to secure some of the most amazing, loyal sponsors imaginable – but we all know the BTCC is big money, so I’ll have to come up with something new to make it to the grid next year.

“Exposure like this is priceless and Motorbase have shown if you have a ‘never give up’ attitude, you will get rewarded.”