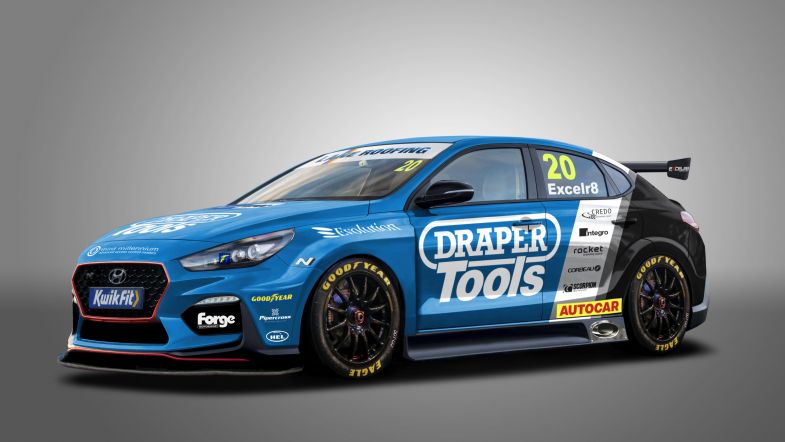 Hyundai name to debut in 2020 with new-look Excelr8 entry

Excelr8 Motorsport has announced that it will bring the Hyundai name into the British Touring Car Championship for the first time during the 2020 season.

Having run two MG6 GTs this season in its debut campaign, the second-year team will switch to a pair of new i30 Fastback N Performances in a move that will see the South Korean brand join the long list of marques to have appeared in the series.

It will also mean the number of manufacturers represented during the current NGTC era will rise to 15.

Excelr8 had previously expressed an interest in running a car from the MINI family, having long been involved in running cars in the MINI Challenge. However, with no cars in the MINI range conforming with the series’ regulations, alternative options were explored before the decision was taken to switch to the Fastback version of the i30 N, which was launched in early 2019.

Although an independent programme, the two cars will compete with the support of “key players in Hyundai’s UK Dealer Network”.

The design process for the i30 Fastback N Performance began in late September, with the team now facing a busy winter to build up the new cars in time for the start of the 2020 season.

Excelr8 will work closely with Cosworth Electronics during the development of the car in order to future-proof the i30 ahead of the impending introduction of hybrid technology into the series.

“The build of the Hyundais marks the next stage in our multi-year plan to become a title contender in the British Touring Car Championship,” team principal Oliver Shepherd said.

“The i30 Fastback N Performance offers a very favourable combination of wheelbase, track width, drag coefficient and torsional stiffness, so we are extremely excited about the prospects of this project. It’s going to be an extremely busy winter, but the whole team is extremely motivated to get the cars out on track as soon as possible.”

Team owner Justina Williams was also proud to be able to confirm the introduction of the new car.

“The 2019 season has been a real success for the team having achieved all the goals we set for ourselves at the start of the year,” she said. “On track we scored points with both drivers in our first season, and from operational, commercial and presentation points of view we were able to compete with the established front-runners.

“With the development of these new cars, we should not only be achieving better results, but also deliver increased value for our brand partners, especially as we are first out of the blocks with the introduction of hybrid technology.”