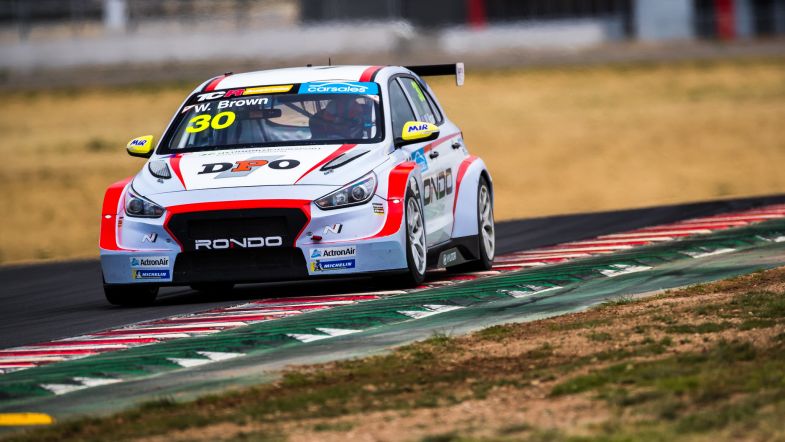 Champion Will Brown romps to victory in Tailem Bend opener

TCR Australia champion Will Brown produced a controlled drive to secure victory in the opening race of the season finale at The Bend Motorsport Park.

There was drama before the race even kicked off, with the power steering problems that had affected his Ashley Seward Motorsport-run Alfa Romeo Giulietta Veloce TCR in both practice and qualifying preventing pole-sitter Dylan O’Keeffe from taking up his place at the head of the field.

The sister car of debutant James Allen then failed to get away at the start of the green flag lap, although the car was recovered quickly to allow the race to get underway as planned.

O’Keeffe’s issues meant Brown effectively started the race from pole position but the Hyundai driver almost lost out on the run to turn one to a fast-starting Tony D’Alberto.

Further back, Aaron Cameron was fighting hard with the second Hyundai in the hands of Nathan Morcom to run in third, with Chris Pither and Jordan Cox also managing to get ahead of Morcom before the end of the lap.

Towards the rear of the field, heavy contact between the out of control Audi of Liam McAdam and Chelsea Angelo’s Holden Astra saw both cars go off into the gravel, with officials left with no option but to bring out the safety car so the two stricken cars could be recovered.

Brown led the field behind the safety car from D’Alberto and Cameron, with Pither, Cox and Morcom rounding out the top six. Just behind, Jason Bright held seventh, with John Martin having quickly overcome an engine change penalty that had dropped him to the back of the grid to vault up to eighth.

The race would resume on lap five, with Brown getting the jump on D’Alberto and Cameron coming under attack from Pither into turn one, with the Renault racer unable to find a way through.

Brown immediately broke the lap record on the first flying lap as D’Alberto slipped back towards Cameron, who had managed to gap Pither in the battle for the podium places.

The fight for second allowed Brown to pull away at the front, with Cameron making the most of a small error from D’Alberto to slip through into second spot.

Morcom meanwhile dropped out of the top six fight when he lost the front-right wheel under braking and went off into the gravel.

Once clear of D’Alberto, Cameron quickly started to pull away from the Honda, which was now coming under increasing pressure from Pither’s Renault Megane and Cox’s Alfa Romeo.

A mistake from Pither on lap eleven saw him put a wheel off the side of the track in the Renault and that gave D’Alberto breathing space in the fight for third, with Pither left looking in his mirrors as Cox tried to find a way past into fourth and Martin closed in behind.

Out front however, Brown secured a comfortable seventh win of the season despite Cameron closing the gap at the front down to little over a second on the final lap, with D’Alberto clinching third place.

The podium finishes ensured that both drivers moved ahead of the absent O’Keeffe in the battle to secure second in the standings ahead of races two and three on Sunday.

Pither held off the challenge of Cox and Martin through the final lap to secure fourth place, with Jason Bright a somewhat lonely seventh in his Volkswagen Golf GTI TCR.

Russell Ingall was eighth in his Audi RS 3 LMS ahead of James Moffatt, who – like Martin – came from the back of the field after his issues in qualifying in the second of the Renaults.

Iain McDougall rounded out the top ten after late problems for Barton Mawer prevented him from scoring a top ten on his series debut in the Subaru WRX STI TCR.

Race two of the weekend will take place at 11:40 on Sunday.