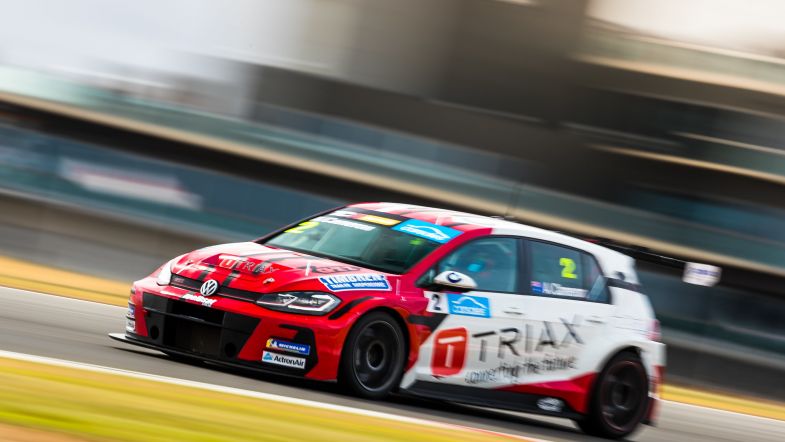 Aaron Cameron romped to victory by the second largest margin of the year in the penultimate race of the TCR Australia season as the battle for second in the championship standings hotted up at The Bend.

Following his win in Saturday’s opening race, Will Brown had started from pole at the wheel of his Hyundai i30 N TCR and the new champion made the ideal getaway to lead Cameron into turn one, with a fast-starting Jordan Cox jumping ahead of Tony D’Alberto’s Honda into third.

James Moffat was also making up places in the first of the GRM Renault Meganes to sit fifth having started back in eighth.

Brown was unable to try and break away at the front despite Cameron and Cox battling for position behind, with the fight for the lead quickly becoming a three way affair.

Cameron was finally able to make the pressure pay on lap four when an error from Brown saw the Hyundai get out of shape, allowing the Volkswagen man through into the lead.

That put the Melbourne Performance Centre driver two places ahead of rival Tony D’Alberto in the fight for second in the standings, with things swinging towards Cameron even more when D’Alberto then lost fourth place to Moffat.

At the same time, Dylan O’Keeffe – working his way forwards from the back of the grid in the Ashley Seward Motorsport Alfa Romeo – pulled off with a mechanical issue that ended his chances of finishing second to Brown in the standings.

Once ahead, Cameron quickly set about building an advantage out front and was soon more than a second clear of Brown as the leading cars started to spread out.

It meant the main battles for position were towards the lower reaches of the top ten, with John Martin under huge pressure from Nathan Morcom over seventh and Chris Pither pushing Andre Heimgartner for ninth.

Having swarmed all over the rear of Martin’s Honda going into the seventh lap, Morcom made a move stick down the inside into turn three to secure the place and then set about chasing after Jason Bright’s Volkswagen.

Pither meanwhile then cleared Heimgartner’s Holden as he continued to fight back from being dropped to the rear of the grid for an engine change.

Heading into the second half of the 14 lap encounter, Cameron’s lead continued to grow, with Brown appearing to struggle for grip with his Hyundai.

That briefly allowed Cox to draw onto the rear of the i30 N TCR, but the champion then started to ease back away from the Alfa Romeo by positing his fastest lap on lap nine – albeit some seven-tenths of a second down on Cameron’s best.

As Cameron romped to his maiden victory in the series, Brown was forced to hold on for second as Cox came back at him again through the final laps but the champion held on to beat the Alfa Romeo to second.

Moffat took fourth place ahead of D’Alberto, with the Wall Racing driver now taking a lead of just one point over Cameron into the season finale in the race for second place in the standings – and the $50,000 that goes with it.

D’Alberto, who was left questioning the pace of some of his rivals after taking the chequered flag, was lucky to even make the finish – with his Honda then suffering a puncture on the cool-down lap after chequered flag had flown.

Morcom was sixth in the second of the Hyundais after he managed to quickly clear Bright’s Volkswagen, with Pither showing fine pace in his Renault to end up with eighth place.

Russell Ingall took ninth after a late move on Heimgartner’s Holden, with the former Supercars champion having earlier made the most of contact between Martin and Alexandra Whitley to sneak ahead of the pair at turn one.

With his electrical gremlins finally resolved, Aurélien Comte was able to start the race from the back of the grid in DG Sport’s Peugeot 308TCR and would finish the race in 14th spot.