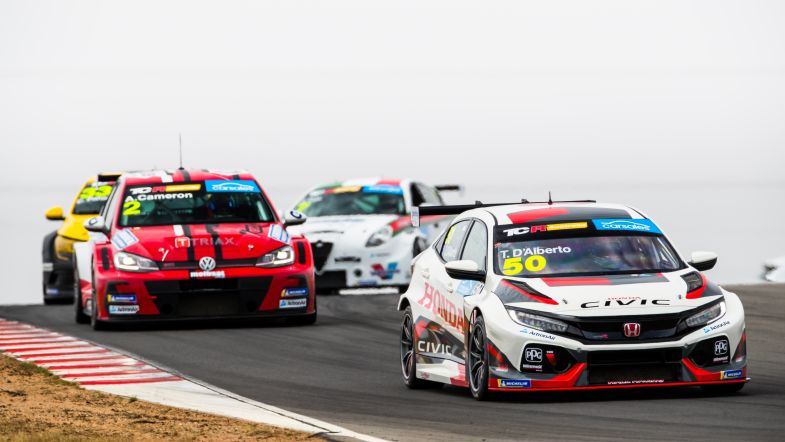 Mixed emotions after fight for second resolved at The Bend

The TCR Australia season finale at The Bend saw a true mix of emotions as the fight for second in the championship standings was resolved in favour of Tony D’Alberto.

Dylan O’Keeffe had held the place going into the weekend at the wheel of his Ashley Seward Racing Alfa Romeo, but would drop out of contention after mechanical issues saw him fail to start two of the three races – and retire from the other.

That left the fight for second behind new champion Will Brown as a two-way affair between Wall Racing driver D’Alberto and Melbourne Performance Centre’s Aaron Cameron.

Cameron closed to within a point of D’Alberto with his first series win in race two – putting him in the box seat to secure the runner-up spot, and $50,000 in prize money.

Although Cameron lost places at the start and dropped back to sixth spot, the youngster was still set to take the place after D’Alberto ran off track and dropped down to 15th.

The former Supercars racer had battled his way back into the top ten going into the closing stages but was still running behind Cameron when the Volkswagen Golf GTI TCR suddenly slowed with a loss of power.

It allowed D’Alberto to sweep through to secure what was fifth place in the race, with Cameron bringing his ailing car to the flag in tenth after losing further places in the final two laps.

It meant D’Alberto therefore clinched second in the standings by just 15 points.

“I didn’t think that was going to happen, but I’ll take it,” said D’Alberto, who had earlier expressed frustration at the lack of straight-line speed for the Honda Civic Type R. “I felt sorry for Aaron because he did a good job all year, but I’m certainly happy to take second in the championship.

“It was a wild race. I went off the track on the first lap and was basically last. I raced as hard as I could through the field and I could start to see Aaron, and in the end, I was able to pass him easy because of his issue.

“I’ve really enjoyed the season, and this is a great reward for Wall Racing and Honda who have put in a massive effort this year.”

Cameron meanwhile was left to wonder what might have been after missing out on the place thanks to the late drama.

“That’s the highest of highs and the lowest of lows,” he said. “No boost. No turbo. Nothing I could do.

“I saw D’Alberto coming and tried to block him through the last corner, but he just pulled out and passed me.”