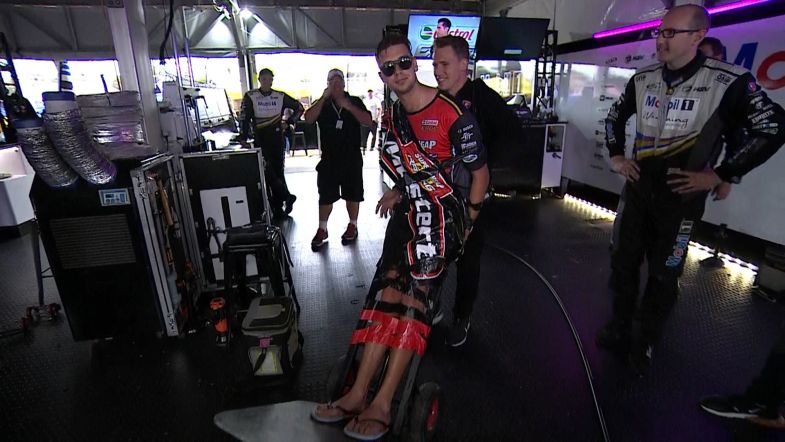 Chaz Mostert gets delivered to Walkinshaw Andretti United ahead of schedule

With all eyes on the podium at the end of the Supercars Championship, Tickford Racing took the opportunity to reveal one of the worst kept secrets by taking their driver Chaz Mostert down to Walkinshaw Andretti United, a move which has been speculated about for months.

As Mostert’s contract with Tickford is set to run out on the 31st of December this year, the silly season chatter has been about where the 2014 Bathurst winner will end up for 2020, many linking him to a drive at WAU which has two vacant seats thanks to the departure of James Courtney and Scott Pye.

Getting taped up and attached to a moving trolley, Mostert was sent packing by Tickford and dragged down to the WAU pit where he was greeted by the team, although both sides had to deflect the attention as an announcement hasn’t been formally made regarding the 2020 lineup.

“He was just a visitor to our pits,” WAU co-principal Bruce Stewart said to commentator Neil Crompton on Supercars Trackside.

“We said ‘go back to your team and we’ll catch you again later’.”

Mostert played the “act dumb” card when Crompton quizzed him on the stunt.

“I don’t know what you’re talking about,” Mostert said.

“I’m not sure what’s going on, but I wasn’t on the podium today so we want to make sure you big gun commentators would come down and talk to us.

“We thought we’d have a bit of controversy.”

With Mostert heading to WAU, he will likely be joined by Super2 champion Bryce Fullwood as Tekno’s Jack Le Brocq looks set to replace him at Tickford.