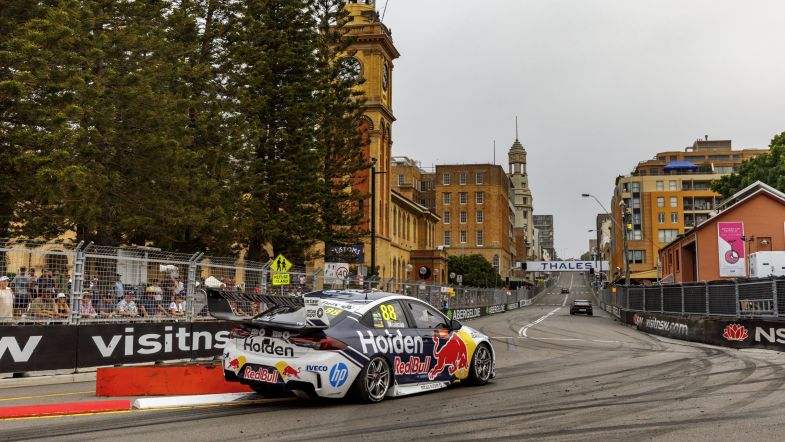 Jamie Whincup has taken his fifth win of the Supercars season in the last race of the year, seemingly controlling the day by leading from pole and making use of a strong Triple Eight Race Engineering strategy for the victory.

The seven-time series champion looked to be the fastest car all day, provisionally qualifying second, taking pole in the shootout and then finally winning the race on a combination of pace and strategy against his rivals.

It was a hard-fought battle through the middle stint for Whincup, having to bide his time in traffic while waiting for his strategy to come to him, finally making use of it at the end of the race by stretching out a healthy lead to the next car on track.

A result of second and fourth for DJR Team Penske’s Fabian Coulthard and now two-time series champion Scott McLaughlin has given their squad a second team’s championship, winning the title over Triple Eight despite Whincup’s win.

Though the front four went two-by-two into the first corner at the race start, the order remained the same as Whincup led the first lap, heading Cam Waters in the Tickford #6 car then the DJR Team Penske pair of Coulthard and McLaughlin.

Contact a few positions back between the Erebus entry of David Reynolds and Walkinshaw Andretti United’s Scott Pye forced the former into the tyre wall, being collected by Tickford’s Lee Holdsworth which caused cosmetic damage to both cars, dropping them down the order as they nursed punctures back to the pits on the opening lap.

Waters took an early pit stop on lap six, coming in from behind Whincup and coming back to the track with clear air in a long second stint. Though the early stop was a break from the norm in terms of strategy, Tickford made the decision to try and undercut Whincup in the long run.

From 21st on the grid, Shane van Gisbergen started to chip away at those in front, wanting to get the #97 Triple Eight car up into the fight towards the sharp end of the pack as his team-mate Whincup continued to lead the way.

McLaughlin’s first tour to the pits came on lap 16, taking a longer stop than his Ford counterpart earlier in the race and rejoining the circuit behind Waters who had made up a handful of time in clear air.

A stop for Anton de Pasquale put the Erebus car back on track fighting for the same piece of road as WAU’s James Courtney, the pair tangling out of Turn 2 which broke the #99 car’s steering, sending de Pasquale into the fence and giving the #22 a puncture.

With the incident triggering the first safety car of the weekend, the rest of field came into the pit lane for their first stops, giving Waters the race lead from McLaughlin, Whincup and Coulthard, though the latter two had more fuel on board.

The race restarted on lap 30 with Waters in control out front, having McLaughlin hot on his heels while the Brad Jones Racing car of Macaulay Jones held up Whincup and Coulthard as racing resumed, being a lap down but trying to stick at the front.

With a consistent gap to Whincup, McLaughlin started to push Waters and apply pressure to the back of the Tickford car which had stopped a lot earlier in the race but took on a smaller amount of fuel. The fight for the lead allowed Whincup to gnaw away at the gap, getting ever closer while also retaining a fuel advantage.

Light rain started to hit the circuit on lap 40, forcing officials to declare the race as wet so teams could fit the grooved Dunlop tyres if they needed to if the worse weather arrived.

Waters finally stopped for the second and last time on lap 50, relinquishing the lead to McLaughlin who had Whincup and Coulthard close behind. Out of the top three, Coulthard was on the best fuel strategy but needed to be on the tail of Whincup to capitalise.

Their stops came on the next tour, Whincup being dropped off the jacks at the same time as Coulthard but the position of the Triple Eight boom meant the seven-time champion led out of the pit lane.

McLaughlin followed the status quo on lap 52, taking on his dump of fuel to the end which meant he emerged back on track with a big air gap to Coulthard in front and Waters behind.

Brad Jones Racing had a dark horse in Tim Slade who was able to pit and come out on front of McLaughlin, effectively taking third place for the race but with the two-time champion behind him, eager to get his DJR Team Penske car on the podium.

Pye stopped from the lead on lap 58, having worked his way into podium contention for WAU in his last start for the team. He was able to come out of the pits just behind McLaughlin and chase the front runners to pick up the scraps if there were any late race incidents.

A late safety car was avoided on lap 70 as James Golding stuck the #34 Garry Rogers Motorsport Commodore into the tyre bundle, going too hot into Turn 2 but able to drag it out which allowed the race to stay green.

Taking the final pit stop of the season, van Gisbergen made his final visit to the lane on lap 78, coming out behind BJR’s Nick Percat in the battle for ninth place, well up on his qualifying position of 21st.

With the earlier safety car ending the race a few laps early thanks to a time certain finish, Whincup was able to coast home for his fifth win of the year in front of Coulthard who broke his podium drought on Saturday. Slade hung on to third ahead of McLaughlin, giving BJR a podium to finish the year in what may be his last race for the Albury team.

Scott Pye’s strong weekend off the back of a stomach bug on Friday saw him score a top five result on departure from WAU, putting in one of their strongest race weekends of 2019. Chaz Mostert was able to get a sixth place finish on his last race for Tickford Racing despite starting outside the top ten, keeping van Gisbergen behind him who got past Waters on fresh rubber late in the race.

With season 2019 now over, McLaughlin and DJR Team Penske have done the triple of Bathurst win, championship victory and team’s championship; something a driver has not achieved since Whincup and Triple Eight in 2012.