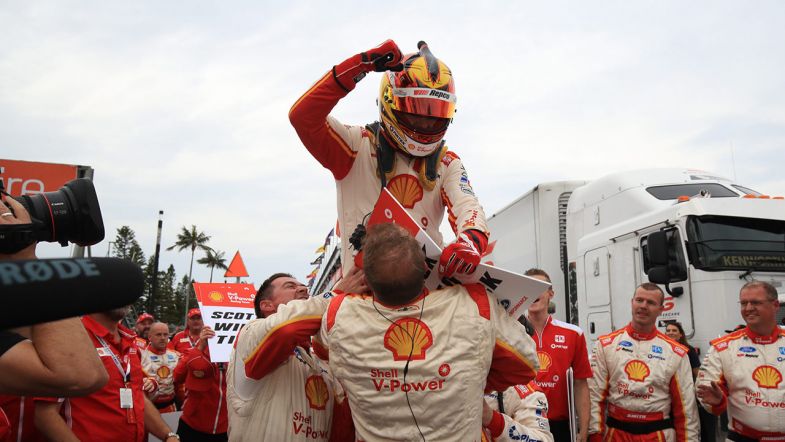 DJR Team Penske’s Scott McLaughlin has spoken of how proud he is of his team after their result in Sunday’s Newcastle 500 finale ensured the team became the first since 2012 to take the “triple”.

An unofficial title given to the winners of the Bathurst 1000, driver’s and team’s championships in the same year, DJR Team Penske joins benchmark outfits like Triple Eight in being able to claim a victory in all three within twelve months.

Though McLaughlin’s Bathurst victory came under intense scrutiny thanks to team orders issued to team-mate Fabian Coulthard late in the race and a qualifying engine which was later deemed illegal, McLaughlin still takes pride in his team’s work.

Speaking to TouringCarTimes after officially being crowned as a two-time champion, McLaughlin heralded his team’s effort to put together the triple while being involved in the homologation process of the Ford Mustang.

“It takes a big effort to do what we’ve done and as a squad it’s a fantastic feeling to win Bathurst, team’s (championship) and driver’s (championship); that’s the goal that everyone has and it’s a surreal feeling.

“We’ve never won two championships in a year so to do that is fantastic, to hit Bathurst as well is the cherry on top.

“I think it’s a different feeling (to 2017) because all round we’re pumped. The team’s championship was great that year but I was down.

When asked what he thinks 2020 will hold as to big changes with the cars and how that’ll affect his form, McLaughlin

“If I win as many races as we have, we’ll be right there in the championship,” he said.

“This year has been unreal, if I come back I want to get better in a lot of things, a lot of facets, but I think we can make it better.

“If everyone just bands together and we continue to improve, we’ll be alright.”

McLaughlin joins fellow Ford heroes Marcos Ambrose and Jamie Whincup in being able to successfully defend his maiden title, a feat Ambrose achieved in 2003-04 and Whincup was able to do in 2008-09 before Triple Eight moved to Holden.