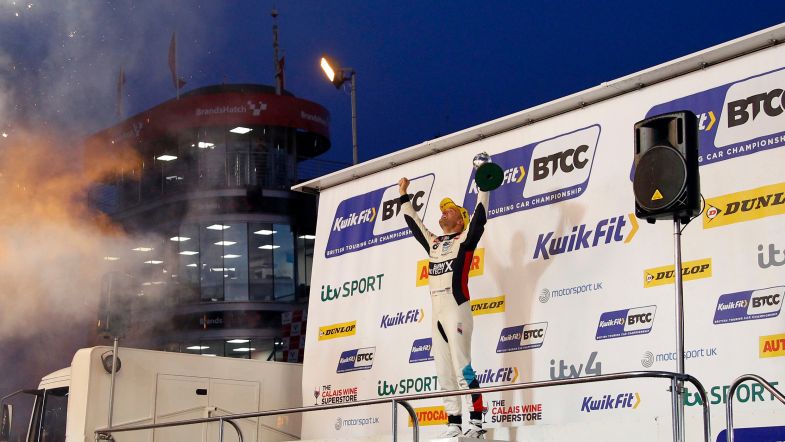 Colin Turkington has confirmed that he will attempt to defend his British Touring Car Championship title with West Surrey Racing in 2020.

The Northern Irishman, who moved level with Andy Rouse on four titles this year, will spearhead WSR’s three-car assault on the series as it looks to build on the success it enjoyed with the new BMW 330i M Sport this year.

Turkington secured the title in a season in which he secured his 51st BTCC victory, and shared a total of eleven wins across the year with team-mate Andrew Jordan – who ended the year second in the standings.

WSR also took BMW to the manufacturers’ title for the fourth successive season.

Having moved level with Rouse on four title wins, Turkington will be seeking to become the first driver in series history to secure the championship five times.

Should he do that in 2020, Turkington would be the first driver since Rouse in the mid-1980s to win the title for three years in a row, with Bill McGovern and Win Percy the only other drivers to have achieved the feat.

“Going into 2020 with Team BMW will mark my 16th season in the BTCC and I couldn’t be happier!” he said. “Remaining with the team was never in doubt and we are excited to be defending our titles together once more.

“Becoming a four-time champion was a very special moment, but I am motivated to keep striving for more. Racing with this team gives me the best chance to achieve further success, and I’m so thankful to both BMW and WSR for these golden opportunities.

“The consistency of the car and personnel is a great boost and further motivates me as we get to see what the potential of this car actually is.  There was a lot of ‘new’ to contend with in 2019 in terms of the car and my engineer, so familiarity of environment should only enhance things.”

Team boss Dick Bennetts said he was delighted to keep Turkington onboard.

“Last year was one of the greatest achievements in the 39-year history of WSR,” he said. “To come into a series as tightly-contested as the BTCC with a brand-new BMW 3 Series, which only turned its first wheel 10 days before the start of the season, win first-time out, and then win both the Drivers’ and Manufacturers’ titles, was something very special.

“Colin first drove for us 18 years ago and has been at the forefront of virtually every success we’ve had in the BTCC. He’s one of the best drivers the series has ever had, so it’s fantastic that he’ll once again lead the charge for Team BMW in 2020 as he aims for a record-breaking fifth title.”