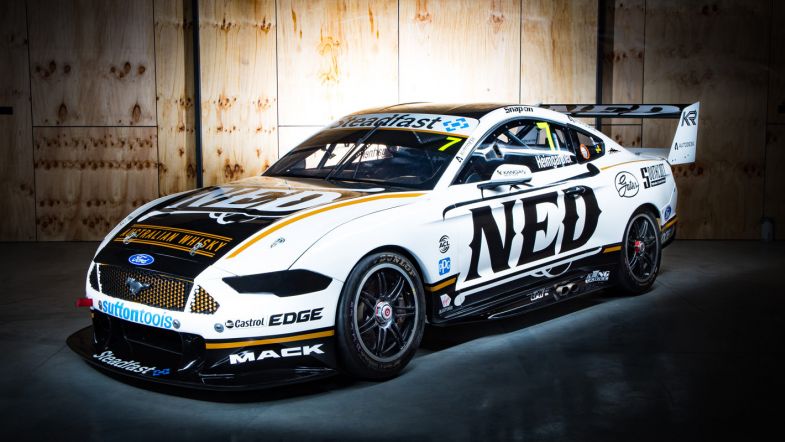 Former Nissan outfit Kelly Racing has pulled the covers off of its first challenger for the 2020 Supercars season, revealing the colours Andre Heimgartner will carry in the team’s first year running the Ford Mustang.

After racing the Nissan Altima Supercar since 2013, Kelly Racing will be moving to the Ford camp next year, expanding the number of Blue Oval cars on the grid to eight while downsizing its own operations to a two car team.

Backed by Melbourne company NED Whisky and with secondary sponsorship from long-time supporters Castrol, it’s the first time that the Kelly Racing team will run a Ford after racing the Holden Commodore from 2009-2012, followed by the aforementioned Altima in the Car of the Future era.

Heimgartner says the partnership between the team and NED is special and that the multi-year deal is a big step for the young Kiwi’s career.

“It’s exciting and a big step in my racing career to have NED Whisky come on-board with a multi-year partnership for my new Ford Performance Mustang Supercar. It is a fun brand and I cannot wait to represent them next year,” he said.

“Myself and the team here have the opportunity to be part of something pretty special with NED so we’ll be doing everything we can to serve them well into the future.”

Team co-owner Todd Kelly is excited by the new partnership as well as the opportunity for the team to show off its first Ford Supercar, having been involved in the majority of the work behind the scenes to change brands.

“It’s extremely exciting to announce a new major partnership between Kelly Racing and NED Whisky for André’s Mustang next year and beyond. We’ve got a big season ahead with a lot of great opportunities made possible by the switch to Mustang so it’s fantastic to bring a new major sponsor onboard that we can share that with and start a new journey together,” Kelly said.

“There’s a great bunch of people behind NED and the brand shares the same values and beliefs that we stand by as a team at Kelly Racing, which is really exciting and I’m confident that we can do big things on and off the track together.”

Heimgartner was able to take a career-best finish of third place at Phillip Island in 2019, giving Kelly Racing its most recent podium result.