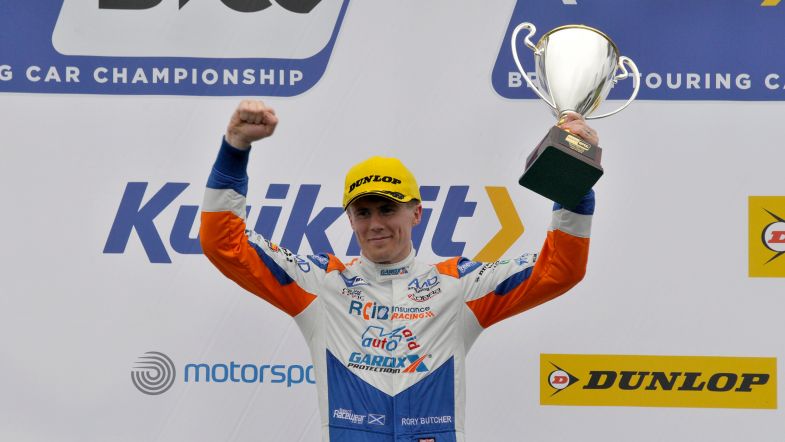 Reigning Independents’ champion Rory Butcher has confirmed that he will make a return to Motorbase Performance for the 2020 BTCC season.

Butcher, who made his debut in the series with David Bartrum’s team back in 2017, will rejoin the Ford squad having spent the past two seasons with the AmD Tuning team.

The Scot secured three race wins last year at the wheel of a Honda Civic Type R to beat Josh Cook to the Independent title and also finished fifth in the overall standings before going on to represent Team Great Britain in the inaugural FIA Motorsport Games.

Butcher becomes the second driver confirmed by Motorbase for 2020 after the team announced the re-signing of Ollie Jackson – himself a former AmD driver – earlier this week, with the Scot aiming high for what will be his third full season in the series.

“I’m absolutely buzzing about rejoining Motorbase,” he told TouringCarTimes. “When they gave me the chance to join the BTCC grid back in 2017, it took my career in a whole new direction and I think it’s fair to say that since then, I haven’t looked back.

“Although I wasn’t able to continue with the team beyond that short stint in 2017, I was lucky to go on and have two fantastic years with AmD. I’ve really enjoyed my time working with Shaun [Hollamby] and his team, and last season was brilliant with the success that we had together on track in the Honda.

“Leaving certainly wasn’t an easy decision to make, but we part on good terms and now I have the chance to return to a team that is like family to me, as we go back a long way.

“There are some really exciting things in the pipeline for the season ahead and I can’t wait to now get out testing in preparation for the start of the new campaign. We have big targets for 2020 and I think it is only natural as a driver for me to raise my expectations and set my sights higher based on what I achieved last year.

“I’ve had a taste of winning races and of leading the championship, and my goal is to take what I have learned so for in the BTCC, and work with the guys at Motorbase to challenge for the title.”

Motorbase boss David Bartrum meanwhile said he was thrilled to welcome the 32-year-old back into the fold.

“I’m delighted to welcome Rory back for 2020,” he said. “We have worked with Rory in GTs in the past and saw his abilities then which lead to us giving him his BTCC debut in 2017.

“We’ve obviously kept a very close eye on his progression since then. Over the last two seasons, he’s learnt a lot and has matured into a driver capable of a championship challenge.

“With Ollie and Rory, we have a great pairing to work with and we’re confident going into the new season. I have quoted on a couple of occasions that Rory was only ever ‘on loan’ and would be back with us one day.

“This year that has proven to be the case and we’re all ready to put the hard work into make 2020 a great season for Motorbase.”