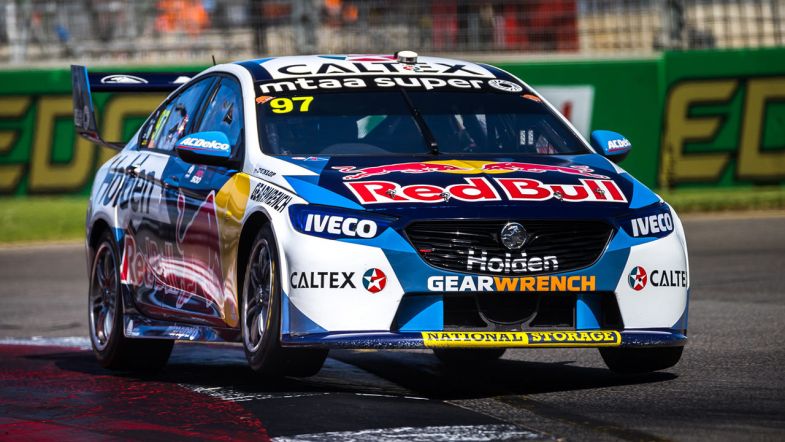 Shane van Gisbergen has continued his strong form around the streets of Adelaide after posting the fastest time in qualifying ahead of the top ten shootout for today’s opening Supercars race.

The Triple Eight Holden Commodore driver topped the session with a fast, late lap, going just a few tenths slower than his own lap record around the street circuit to book a spot in the shootout.

A two-part qualifying outing to determine the order for the top ten run-off, van Gisbergen only took to the track in the second outing after going quick in yesterday’s final practice session.

Qualifying One saw the bottom 14 runners from Friday’s closing practice session hit the circuit to try and make their way into the second outing, only the fastest four book a ticket to take further part in qualifying.

In the short ten minute outing, Andre Heimgartner got the new Kelly Racing Ford Mustang to the top of the order early on, leading the Tickford entries of Jack Le Brocq and Lee Holdsworth as local boy Nick Percat put his Brad Jones Racing Holden Commodore on the bubble in fourth.

Percat elevated himself to first place provisionally with a late quick lap but was soon displaced again by Heimgartner, the young Kiwi posting the fastest time of the session with Holdsworth and Le Brocq also making it through to second qualifying.

The second ten minute session got underway with the fastest ten drivers searching for a spot in the shootout to determine the grid for race one.

Defending series champion Scott McLaughlin was the first driver to get into the 1:19’s, posting a 1:19.8256 halfway through the session after setting the fastest opening sector thus far.

With all cars bar Jack Le Brocq on track to complete their final laps, Shane van Gisbergen moved himself to the top of the order with a 1:19.4462, just ahead of Cam Waters in the Tickford Racing #6 Mustang.

McLaughlin advanced through to the shootout in third with Erebus Motorsport driver David Reynolds just behind in fourth. Will Davison, Nick Percat, Chaz Mostert, Mark Winterbottom, Jamie Whincup and Anton de Pasquale all made the cut for the shootout, due to start at 1230 local time.

Top 10 Scoreboard - Qualifying One - Through to Q2