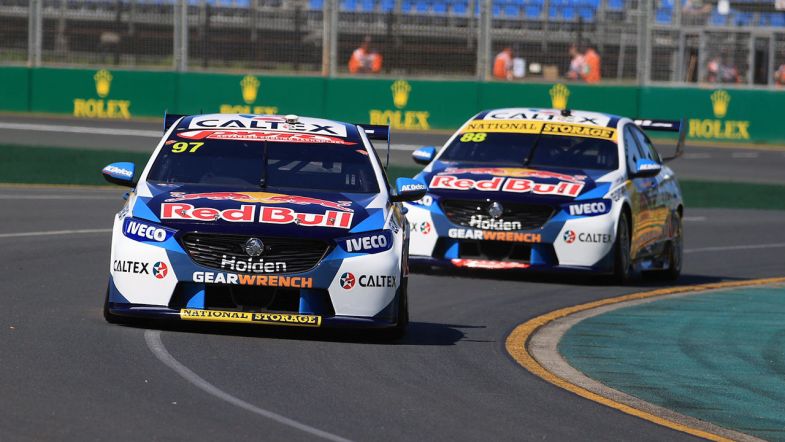 The first two races in this weekend’s Supercars Melbourne 400 will start with Triple Eight Race Engineering cars on pole after Shane van Gisbergen and Jamie Whincup took the top spot for races one and two respectively in qualifying.

Carrying on their pace from the Adelaide 500 where the team completed a clean sweep of poles across the two days, the #97 and #88 cars head up the grid for the opening two hit-outs this weekend with further qualifying yet to be completed tomorrow.

The pair both set the quickest laps in the opening ten minute qualifying session for race one, van Gisbergen getting the advantage after Whincup glanced the wall through his attempt, still managing to come home second and lock out the front row for Triple Eight.

Whincup got his own back in qualifying for the round’s second race, coming out on top to start his 500th race from pole ahead of Tickford’s Cam Waters who was able to combine with team-mate Will Davison to separate the Triple Eight cars, van Gisbergen qualifying fourth.

Davison starts third for race one as well, just ahead of defending series champion and championship leader Scott McLaughlin, the DJR Team Penske #17 only managing fifth on the grid for race two.

Young guns Andre Heimgartner and Anton de Pasquale will start race one from fifth and sixth respectively in their Kelly Racing and Erebus Motorsport machines, Nick Percat in seventh ahead of Waters, Lee Holdsworth and Chaz Mostert to complete the top ten.

Mostert went on an alternate strategy in the second session with Walkinshaw Andretti United waiting until everyone had completed their laps to send him out, setting the fastest opening sector time but ending up seventh at the conclusion of his lap.

After qualifying a dismal 17th for race one, David Reynolds redeemed himself for race two’s grid by ending up in sixth alongside McLaughlin with Holdsworth, Heimgartner and McLaughlin’s team-mate Fabian Coulthard.

Qualifying for race three will start at 1010 local time tomorrow with race four’s session starting at 1030. The first race of the four-race weekend kicks off at 1350 tomorrow, between the two Formula One practice sessions.