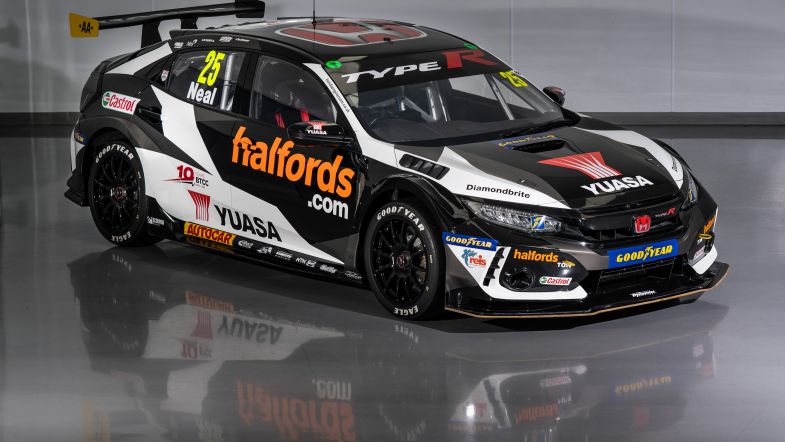 Team Dynamics has revealed the updated version of the Honda Civic Type R that it will once again campaign in the British Touring Car Championship this season.

The FK8 variant of the car – which will again be entered under the Halfords Yuasa Racing banner – was unveiled at the team’s Droitwich base ahead of the BTCC’s annual season launch, which is currently slated to take place tomorrow at Silverstone.

The team will look to try and dethrone West Surrey Racing and BMW in the title standings during the year ahead, with 2019 championship contender Dan Cammish saying he was excited about his chances on track.

“The car looks great and we’ve enjoyed some excellent development over the winter, while my new two-year contract with the team gave me a huge boost,” he said. “I’m going into 2020 with the same attitude as 2019 – I want to do the best job I possibly can. I very nearly won the championship last year, so I know I have what it takes.”

Team-mate Matt Neal meanwhile is currently working his way back towards full fitness after his cycling accident earlier in the year and remains focused on a title challenge of his own.

“My season hasn’t started off in the best of sorts with my shunt earlier in the year, but I’ve been progressing well – I jumped in this season’s Honda Civic Type R last week for the first time and managed to put a significant amount of laps under my belt,” he said.

“2020 is a special year for me as I reach my 30th season in the championship – I know I still have the pace and with Dan, I feel we have a pretty awesome team of old heads and young talent. Personally, I’ll be gunning for my fourth title, but first we need to get the Teams’ and Manufacturers’ championships wrapped up for our sponsors!”