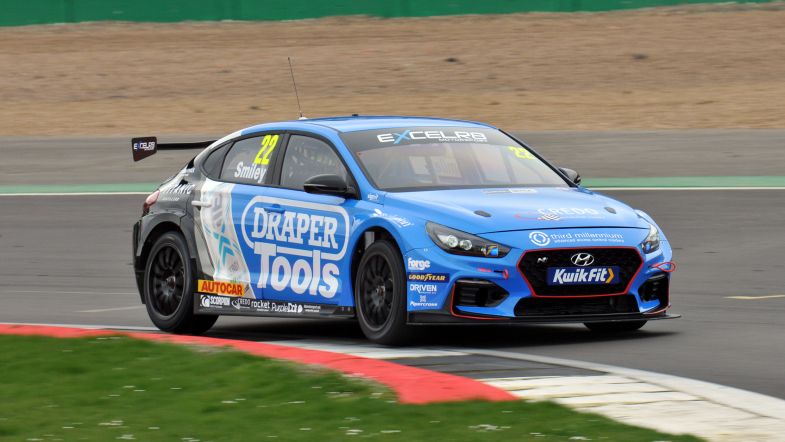 Chris Smiley has praised the EXCELR8 team after a strong showing for the Hyundai i30 N Fastback Performance during the official BTCC test at Silverstone.

The new car appeared in a timed session for the first time during Tuesday’s launch event having hit the track for a shakedown at Snetterton late last week.

Senna Proctor raised eyebrows by ending the day at Silverstone with the sixth quickest time with Smiley close behind in tenth despite his running being ended early by damage sustained in a trip off track at turn one.

The former BTC Racing driver refused to be too downbeat about the fact however, insisting he was pleased with the test as a whole and praising his new team for the work in getting the Hyundai out on track.

“Turn one is high speed and I ran onto the grass and the splitter dug into the ground,” he told TouringCarTimes. “It was just because of the soft grass as at any other time there’d have been no damage to the car. It’s not what we wanted, but it’s not too bad.

“Overall we’re happy, although I think you can always take the times with a pinch of salt. We weren’t chasing a quick lap as the focus was on set-up as it was only our second time running the car and we need to collect data and information about it.

“It feels good out of the box and the team has worked really hard, day and night, to get it ready. There is a lot of potential in the Hyundai and we need to work to get it into the sweet spot, but the early impressions are certainly positive.”