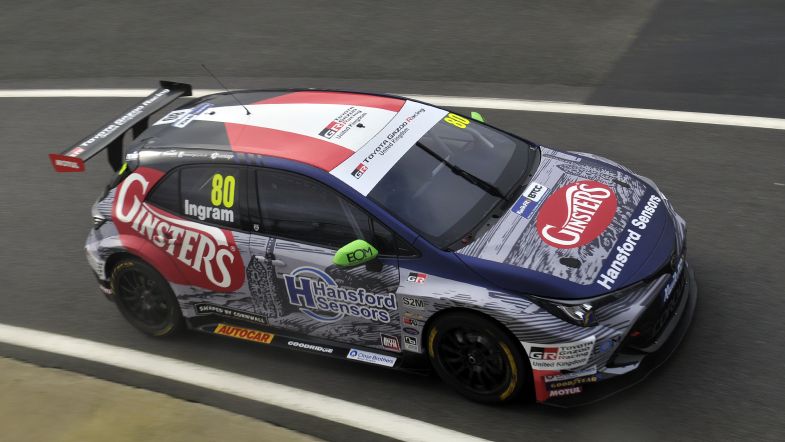 Tom Ingram said he was pleased to top the times during the annual British Touring Car Championship season launch at Silverstone, with the Speedworks driver laying down a marker as the field took to the International layout for the first time.

Ingram posted the fastest time of the day with a relatively early run during the afternoon session to edge the MB Motorsport Honda of Jake Hill out of top spot, with the pair split by less than a tenth of a second.

The former Independents champion goes into 2020 looking to a build on a strong debut campaign for the Toyota Corolla and he said that early impressions of work carried out to improve the car over the winter were positive.

“The test has gone really well,” he told TouringCarTimes. “Aside from being fastest, we got a lot done and were able to work through the plan that we had in place.

“The car felt really good and there is loads of stuff that we’ve done over the winter, some of which you can’t see and which I won’t tell you because we don’t want everyone to know! There is still more to come and more time to find, so we’re in a strong place.”

Ingram added that it was a shame to not now be able to build on the pace shown during the test after the opening rounds of the season were postponed due to the coronovirus crisis, but backed the decision taken by TOCA as the UK continues to try and deal with the ever-changing situation.

“It’s a shame that we won’t be going racing in a few weeks as we’re ready to go, but there is nothing we can do about that,” he said. “The current situation is shit for the whole world, and we have to remember that what we are doing here is very insignificant against that, and doesn’t matter when compared to people’s health.

“The fact that we don’t know when we’ll be racing changes the goalposts, but it is the same for us all and we just have to be sensible with the decisions that are made.”