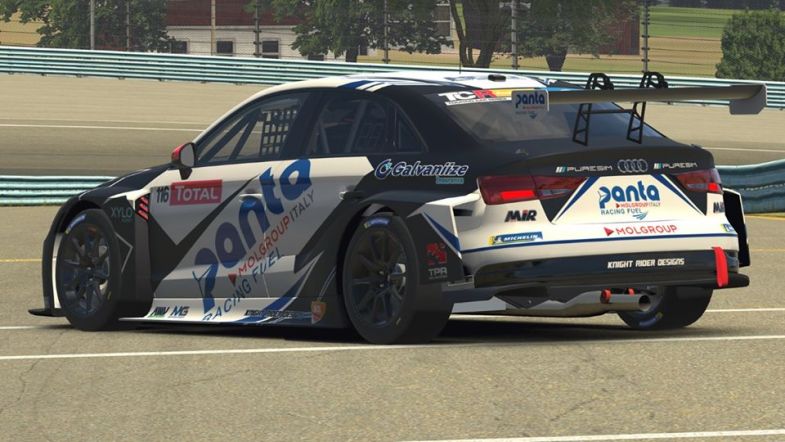 The opening round of the ARG eSports Cup saw two international drivers win the back-to-back races around the Mount Panorama circuit as carnage highlighted the first major online races in Australia.

Held on the iRacing platform for drivers racing in categories run by the Australian Racing group, the 52-car strong field of Audi RS 3 TCR machines provided some close racing and the first TCR action in Australia since late last year.

Briton Ash Sutton won the opening race of the series, starring as a guest entry in a Panta Fuels backed car as Track Tec Racing’s Rowan Shepherd took out the second race, a reverse grid affair from the opening bout.

After qualifying on pole, Dylan O’Keeffe streaked away to an early lead in the opening 30 minute feature race, heading up 2017 BTCC Champion Ash Sutton in the wildcard entry. Sutton found his way to the front halfway through the race as he put a move on O’Keeffe into Griffin’s Bend up the inside, taking control of the field.

Sutton’s lead nearly went away as he was held up by the carsales.com.au entry of Mike Sinclair heading into Forrest’s Elbow, making contact with the online motoring editor but still keeping O’Keeffe behind, the pair able to continue their scrap for the lead.

The top two continued to put a gap on the pack, extending their margin to Nathan Herne and Harley Haber in the battle for third by over 10 seconds heading into the final laps.

O’Keeffe ranged back up to the rear of Sutton in the dying stages of the race, getting to within half a second of the former BTCC champion but unable to get past, giving Sutton the race win as Herne got past Haber after an earlier pass for the last step on the podium.

The second and final race of the round was a reverse grid affair for the top 26 finishers from the opening race, putting Rowan Shepard and Michael Clemente on the front row. From pole, Shepard converted to a good start early on, holding the lead across the opening lap as Aaron Cameron found his way up to second with Steven Johnson holding off Clemente for third.

Johnson’s first sim racing start was going well until contact nearing the halfway mark of the race took the former Supercars driver out of contention, destroying his Audi in shades of his father Dick’s 1983 Bathurst 1000 qualifying crash.

In the fight for second, Cameron was lucky to retain the runner-up spot after making a mistake down from the Esses and into The Dipper, making contact with Holdsworth though the pair were able to continue and fight on another day.

Holdsworth was eventually able to make his way past Cameron as 2007 Supercars champion Garth Tander behind him fended off from Ransley and Clemente. Tander and Clemente made contact on the run up to The Cutting on the penultimate lap, sending Tander into the wall and out of contention as Clemente dropped a handful of spots.

Shepherd was able to hold onto the lead out front, coming home with a comfortable margin from Holdsworth and Cameron. Contact between O’Keeffe and Clemente on the final lap dropped the latter down the order as the opening race winner finished tenth.

The next round will be held at the Netherlands’ Zandvoort Circuit, set to make its return to the Formula One calendar later this year.