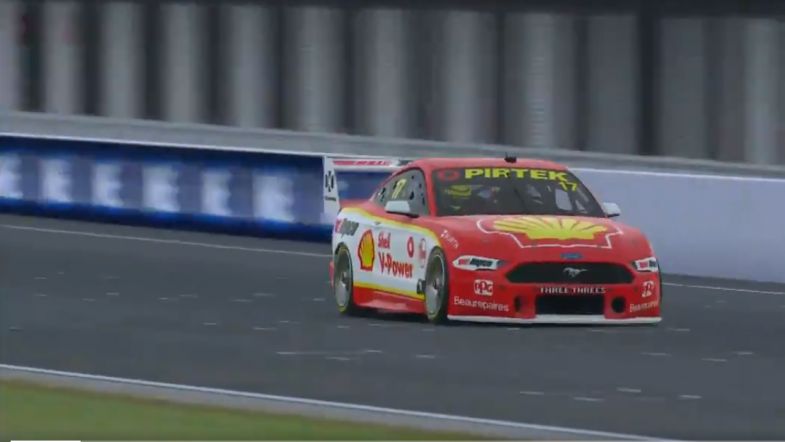 Supercars championship leader and defending two-time champion Scott McLaughlin has stamped his authority on the series’ online championship after taking the round win in the opening round of the Supercars All Star Eseries.

Off the back of taking the championship lead in the Indycar iRacing Challenge only a few nights ago, the Kiwi put in three strong and commanding drives to win two out of the three races in round one of the official Supercars iRacing championship.

A double-header across two high speed circuits kicked off the 10 round championship with the field first visiting the Phillip Island Circuit, a track which had been dropped from the real world calendar in 2020, for a nine lap sprint to get things going.

The inaugural race got underway with the Erebus Motorsport car of Anton de Pasquale on pole, heading up Triple Eight’s Shane van Gisbergen and Supercars champion Scott McLaughlin across the top three spots.

A good run off the line from McLaughlin put him into the lead around Turn 1, the DJR Team Penske driver leading de Pasquale around Turn 2 as they made contact, maintaining position while the pack behind them fought hard.

Contact for de Pasquale at the fourth corner put the pre-race favourite well down the order as Fabian Coulthard got up to second by the end of the opening lap, making it a DJR Team Penske one-two at the front of the pack.

McLaughlin controlled the field by leading the race, comfortably stretching a margin to his team-mate while de Pasquale fought his way back towards the front after the opening lap dramas.

The order stayed largely unchanged for the rest of the race with McLaughlin taking the first Supercars Eseries win off the back of winning the Indycar iRacing Challenge at Barber Motorsport Park earlier in the week. A one-two for the team reflected their real-life pace as Cam Waters and Andre Heimgarter made it an all-Ford top four with Tickford Racing and Kelly Racing respectively.

Shane van Gisbergen recovered after early drama to finish sixth while de Pasquale ended up in eighth after his opening lap incident, putting in a strong drive and coming home just ahead of Walkinshaw Andretti United’s Chaz Mostert.

The night’s second race was a reverse grid affair, again at Phillip Island but going for 16 laps with a compulsory pit stop, giving drivers and their teams an extra headache to try and sort out.

Tickford Racing’s Jack Le Brocq was able to lead the opening lap, extending a margin to those behind as contact happened throughout the field. From last on the grid, McLaughlin got up to inside the top ten as he weaved his way through the incidents.

van Gisbergen’s chance at a win didn’t last long as he was involved in contact out of Turn 4, being spun and hit up the rear before Brad Jones Racing driver Jack Smith added insult to injury, spinning the Kiwi at Turn 6.

Out front Le Brocq took command of the race but early stops for de Pasquale and McLaughlin brought them back into the mix, the pair being split by the Walkinshaw Andretti United pair of Mostert and Bryce Fullwood.

In the final laps, de Pasquale ate into Le Brocq’s lead, getting right up behind the Tickford car in the last tour before making contact around the final corner, forcing Le Brocq wide and coming through to take the win.

However, Driving Standards Observer Craig Baird issued de Pasquale a 30 second penalty for the contact, giving Le Brocq the win and pushing the Mostert and McLaughlin higher on the podium.

Moving on to the Monza Grand Prix Circuit for a 19 Lap race, it was again de Pasquale on pole as he was spurred on by his win being stripped courtesy of the post-race penalty in Phillip Island. McLaughlin started alongside the Erebus driver and got the better run off the line into the first chicane.

As the opening race winner entered the chicane, chaos kicked off behind him, sparked by Jake Kostecki’s Matt Stone Racing car taking to the grass and making contact with de Pasquale and Fullwood. The ensuing melee kept going all the way through Curva Grande, forcing officials to deploy the safety car so the damaged cars (most of the field) could be repaired.

Pit stops under the safety car for a majority of the lead contenders meant Waters led at the restart as both Mostert and McLaughlin had spins at the chicane, only dropping a handful of spots.

de Pasquale’s night went from day to worse as he got punched off the road on the run to the Ascari Chicane by Team Sydney’s Chris Pither, taking him out of the race despite being tipped as the hottest contender to dominate the opening round.

Pither was given a pit lane penalty and was joined in the pits by Kostecki who had forced Coulthard off the track at the first Lesmo, putting both drivers out of position for a good finish.

McLaughlin started to chip away at Waters’ lead lap by lap, gaining spots on the cars between him and the leader, finally taking helm of the race as he pulled off a move at the first chicane after trying the same move on Team 18’s Mark Winterbottom on the previous lap.

Despite a late fuel scare, McLaughlin won his second race for the night thanks to a time certain finish, only having one litre left in the tank as he crossed the line. Waters held on for second with his old sparring partner Mostert coming home in third to take his second podium on the run in the Eseries.

The next round will take place at the same time as the opening races, moving to the Silverstone and Barcelona Grand Prix tracks, providing a big change from the high-speed circuits of the first round.