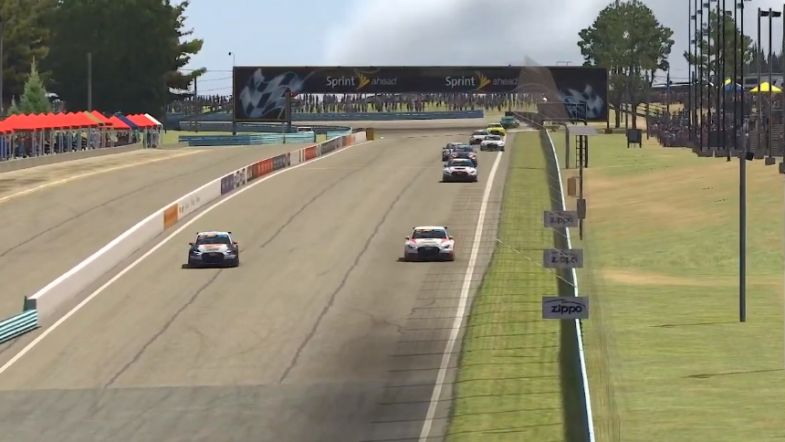 The cream rose to the top in the third round of the Australian Racing Group eSports Cup with former British Touring Car Champion Ash Sutton and current V8 Touring Car driver Harley Haber taking the two wins at Watkins Glen.

Fighting each other for victory across both races, it was the Australian young gun who won the round thanks to his victory in the opening feature race but the pair enjoyed a one-on-one dogfight to end the night, Sutton coming out on top in that instance.

Technical issues delayed coverage of the start of race one but a pack of cars led by Haber and Sutton soon broke away in the opening laps, the pair duelling with Luca Giacomin, Jordan Cox and James Golding for the lead.

The ultra-quick Watkins Glen short track with no chicane led to some big moments into the hairpin at the end of the back straight, slipstreaming becoming a key to moving up some spots in the flat-out section of the circuit.

With 20 minutes to run, Haber and Nathan Herne started to run away from Sutton and Giacomin as Golding decided to take his compulsory pit stop, getting out of the intense battle for the lead.

A crash for Wall Racing’s John Martin took the TCR Australia race winner out of contention, coming together with Niels Langeveld’s Track Tec Racing Audi heading in to Turn 1.

As the pit stops cycled through, Haber and Herne were split by Super2 and S5000 driver Thomas Randle, the Sandown 500 podium finisher from last year getting himself into the mix after starting down in the pack.

After some distraction from the commentary team, Randle moved from the effective race lead to behind Herne, fifth on the road as Giacomin and Cox went long, stretching their stints out for as long as possible.

Championship leader Dylan O’Keeffe got caught up in an accident of his own making as he gave Ricky Capo a bump down the back straight, unsettling the car in front and sending him into the fence. Rebounding into O’Keeffe and Garth Tander, it was game over for all three as they collected Braydan Willmington at the end of the straight.

With all of the stops over and done with, Haber took the lead into the final five minutes as Randle gave chase, being pestered by Sutton while Golding and Herne dropped away from the leaders.

A three-way battle for the lead raged on into the final laps with Haber, Sutton and Randle all trading spots at the front. Heading into the last lap, Haber led from Randle and blocked down the two straights, leading to the line to take the win as Randle was given a touch at the final corner, finishing in eighth.

Sutton was able to hold on to second ahead of Herne for the podium spots as Golding came home fourth for Garry Rogers Motorsport, narrowly ahead of seasoned sim racer Giacomin. 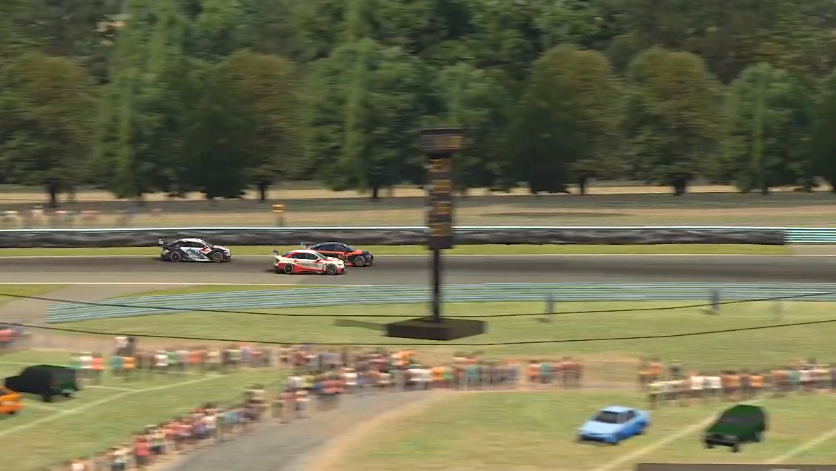 Race two started with the top 20 from the opening race reverse their positions, resulting in chaos in the first lap as just about every corner saw a car depart the track with Randle becoming the biggest victim, again going off at the final turn.

After the earlier crash in race one, Tander got himself up to the lead in a fight with Tom Alexander and Capo but again recorded a non-finish, coming together with Capo which gave Alexander the lead.

From 20th on the grid, Haber worked his way up to second by the fourth lap, dragging Sutton with him as Golding found himself in the top five until he ended up the road in a multi-car accident, putting an end to his strong run.

Haber moved to the front with just over six minutes to run, moving past Alexander and dragging Sutton up with him to resume their battle from the earlier race of the evening. Alexander dropped away from the leaders as he settled in for a lonely run in third, comfortably ahead of O’Keeffe in fourth.

Sutton got himself into the lead onthe penultimate lap, starting to put a gap on Haber who was able to fight back down the straight, forcing the Brit to block hard down the back straight and through the final corners.

Holding on for the win, Sutton’s victory meant Haber had to settle for second but the young Australian took the round win, helping his title aspirations. Alexander settled for a distant third while O’Keeffe recovered from a horrible race one to claim fourth ahead of Glen Serra in fifth.

The ARG eSports Cup will take a break from the TCR car next week, instead running Dallara Formula 3 cars at Monza with no known date on when the series will return to tin-tops.