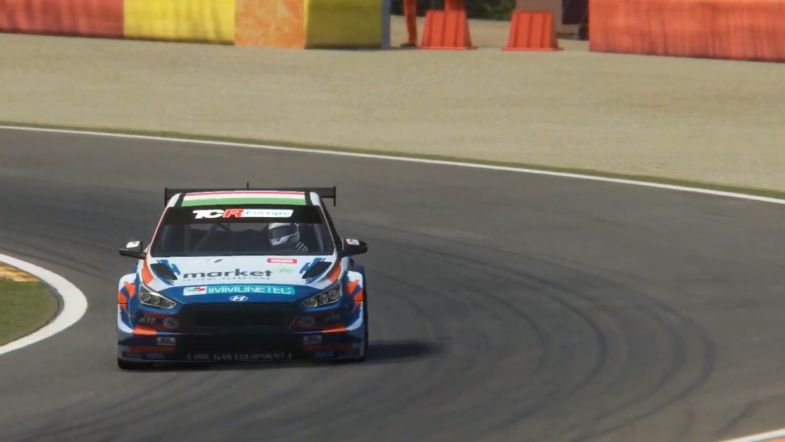 Dániel Nagy kicked off the opening weekend of the TCR Europe SIM Racing Series in the best possible way by claiming a pair of wins at a virtual Spa-Francorchamps.

BRC Racing’s Nagy took pole for the opening encounter and duly led from start to finish in his Hyundai i30 N TCR. The Hungarian, who claimed his only real-world TCR Europe podium at the same circuit last year, quickly built a comfortable margin over compatriot Bence Boldizs in the Cupra.

Several drivers endured a difficult start to the season, most notably Aurélien Comte and Julien Briché in the Peugeot 308TCRs, who failed to make it through qualifying after suffering from too much lag in their sims.

At the front, World Touring Car Cup regular Mikel Azcona jumped past the Peugeot of Jimmy Clairet to lie third in the early stages before making an concerted attempt to wrestle third from Gilles Magnus’ Audi RS 3 LMS.

The pair produced the best racing throughout the eight-lap race, but their squabble ultimately ended in disaster following contact exiting Les Combes on lap four.

Azcona lost third to Tenke while Magnus dropped all the way to 11th where he finished at the flag.

Behind Azcona, Jimmy Clairet finished fifth, ahead of another WTCR regular Niels Langeveld while Homola ended up seventh.

With the grid for the second race determined by the top 12 finishers of Race 1 in reverse order, Andreas Bäckman and Magnus lined up on the front row.

While Bäckman led off the line largely untroubled from Magnus, the pair came to grief at the exit of Les Combes on the opening lap, sending Bäckman’s Target Competition Hyundai i30 N TCR into the barriers.

This allowed Studenic to assume the lead, while Magnus was barged out of second place by Teddy Clairet under braking for Rivage.

Magnus then re-took second place from Clairet around the outside of the Fagnes chicane before the lap was out. Clairet and Homola then made contact at the Campus corner which gave Azcona a free pass to claim third on the exit.

Desperate to fight back, Clairet and Tenke came to blows on the run towards Blanchiment, sending both into the barriers and ricocheting back across the track and causing a multi-car pile-up.

Meanwhile, Azcona made the most of a lock-up from Magnus at the Bus Stop to claim second, which soon became the lead when the Spaniard, driving the PCR Sport Cupra, forced his way past at there Bus Stop on lap 5.

Six-tenths of a second covered the top four of Azcona, Nagy, Studenic and Magnus before Tenke also joined the fight.

Nagy then fought back against Azcona and profited from a superb slipstream through Eau Rouge and Raidillon to reclaim the lead on the penultimate lap.

The Hyundai driver then stretched his legs on the final lap to claim victory by just over a second.

Behind the top two, Boldizs claimed another podium in third, while Magnus contented himself with fourth ahead of Studenic and Báckman.

The next round of the TCR Europe SIM Racing Series takes place at the Red Bull Ring on Wednesday 13th May.