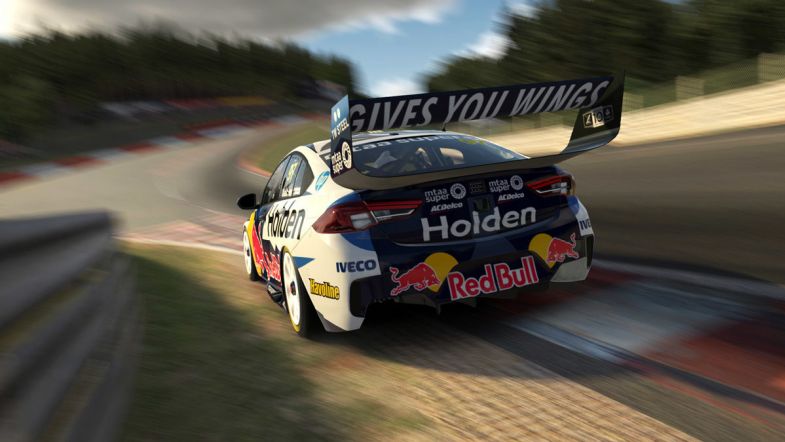 Close racing, all-star wildcards and brilliant finishes were added to the menu alongside frites and waffles as the Supercars Eseries hit the legendary Spa-Francorchamps Circuit in Belgium, adding more European flavour to the Australian series.

The series regulars were joined by international stars from Formula One and the open wheel world, having to prove themselves against drivers who knew the track while they had a theoretical advantage in the cars.

The front row for race one of Shane van Gisbergen and Anton de Pasquale got off to an even start, leading the field to Eau Rouge and Raidillon as the #97 Triple Eight car of van Gisbergen led de Pasquale’s #99 Erebus Motorsport Commodore down the Kemmel Straight.

Championship leader Scott McLaughlin stuck to the rear bumpers of the leading Holdens on the opening lap, having a hold on third in the DJR Team Penske Mustang while wildcard Walkinshaw Andretti United driver and McLaren Formula One pilot Lando Norris worked his way to fourth by the end of the first lap.

With only eight laps to run in the race, it became clear that van Gisbergen and de Pasquale were the protagonists in the battle with McLaughlin holding back Norris and Tickford’s Cam Waters in third rolling into the first round of pit stops.

van Gisbergen came in to block a potential undercut first, bringing the trio behind him into the lane on lap four as de Pasquale stayed out to take the lead. He came in for his stop on the next lap, emerging in front of van Gisbergen at Raidillon but losing out to the quicker Kiwi down the Kemmel Straight.

Making use of slightly fresher tyres, de Pasquale ranged right up to the back of his rival on the penulitmate lap as McLaughlin started to feel the pressure from Waters and Norris behind him, all running out of time to make their moves.

Heading into the bus stop chicane for the final time, de Pasquale tried to go around the outside of van Gisbergen and got his nose on the inside at the left-hander but the pair made contact on the exit, putting the Erebus of de Pasquale into the wall and letting McLaughlin and Waters have a run.

Into La Source, the trio went three wide with McLaughlin on the outside, Waters on the inside and van Gisbergen as the meat in the sandwich, leading to a drag race to the finish which saw van Gisbergen finish first from his Kiwi counterpart and Waters claiming the last step on the podium, just ahead of Norris.

Though van Gisbergen crossed the line first, it was announced after the race that he will be penalised after the conclusion of the round for his role in spinning de Pasquale out, potentially giving McLaughlin the win and Norris a podium on debut.

Courtney on pole, Feeney, Frosty, Reynolds. Three wide pass by Frosty as Les Combes, Courtney off, McLaughlin off track, keeps going. Norris fenced at the end of lap one

Due to finishing last in the first race, former WAU and brief Team Sydney driver James Courtney started the second outing on pole ahead of Super2 driver Broc Feeney, the pair going side-by-side through the opening corners and down the Kemmel Straight.

Though the two Boost Mobile-backed cars led the way, their glory was short-lived when Mark Winterbottom put the Team 18 car down the inside past both of them as Les Combes, taking the lead while Courtney was tagged, spinning down the order.

Incidents through the opening lap saw McLaughlin go off the road, dropping positions to his main rivals in van Gisbergen and de Pasquale who both found themselves behind the WAU car of Chaz Mostert after the round of pit stops.

Having taken two pit stops thanks to incidents, McLaughlin sat outside the top 20 as van Gisbergen got himself into fifth after David Reynolds entered the Erebus pit, relinquishing the lead to 17-year-old Feeney.

Feeney started to gain a bit of a gap over the 23Red car of Will Davison in the final laps as the two-time Bathurst 1000 winner had to fend off former Super2 champion Garry Jacobson whose Matt Stone Racing car was being harassed by Mostert and van Gisbergen.

Making Supercars Eseries history, Feeney became the first wildcard driver to win a race, holding on over Davison as Jacobson kept Mostert in his mirrors to complete the podium. McLaughlin finished well down the order in 21st, one lap down and hurting his championship challenge.

For the final race it was van Gisbergen who started from pole alongside Mostert with de Pasquale following them down into Les Combes, the three Holden runners getting in front of Waters and McLaughlin in the opening sectors.

On the first of the 14 laps, Mostert applied the pressure to van Gisbergen who ran wide into the bus stop, giving Mostert half a look at La Source but it was the Triple Eight car that kept the lead throughout the opening stanza, de Pasquale constantly stalking the top two.

Mostert came in for his first pit stop followed by Waters and McLaughlin on lap four, the WAU car being jumped by the DJR Team Penske entry while van Gisbergen and de Pasquale came into the lane on the next tour, the order effectively remaining the same.

Getting their last stops out of the way on lap eight, Waters followed Mostert into the lane, dropping out into clear air as McLaughlin entered the pits on the next tour of the circuit, emerging on track between Mostert and Waters.

Coming in from the lead for the final time, van Gisbergen and de Pasquale got out onto the circuit in front of Msotert with a decent margin, the two lead packs split by Jamie Whincup who had only taken one stop so far in the Triple Eight car.

In the battle for the final spot in the top ten, Norris battled the Brad Jones Racing entry of Nick Percat through Eau Rouge and Raidillon, getting the WAU wildcard car past the BJR machine for tenth with three laps to go.

Further up the order, McLaughlin put Mostert under pressure for the final podium position on the penultimate lap, chasing the WAU car to get up into third as de Pasquale kept himself under the wing of van Gisbergen’s Commodore at the front.

Contact at the bus stop chicane saw the lead two lose time, de Pasquale again coming out on the other side worse off as McLaughlin passed Mostert for third as the race went time certain a lap short, resulting in another van Gisbergen win. Waters was able to get up over former team-mate Mostert while Feeney and Norris performed as the top wildcards.

With van Gisbergen winning the round, he puts further pressure on McLaughlin in the championship standings as the series moves to the South of the United States of America with stops at Austin’s Circuit of the Americas and Sebring International Raceway in Florida.