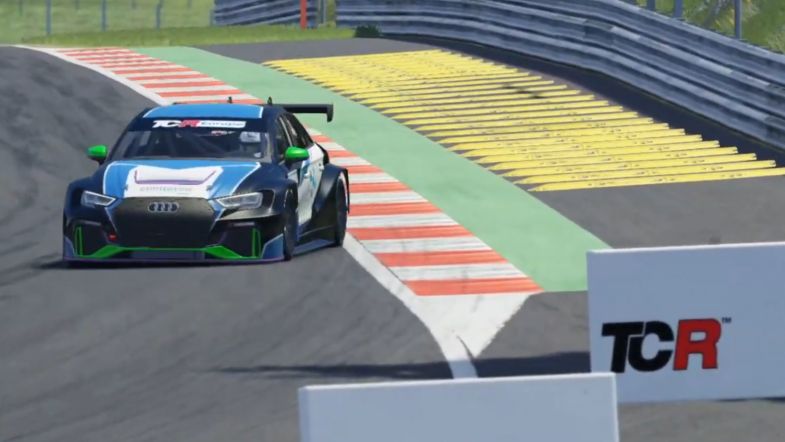 Nagy continued his form from the opening round at Spa-Francorchamps by storming to a second consecutive pole position in qualifying, before converting it into a third straight win in Race 1.

Dutchman Langeveld started the reversed-grid second race on the front row alongside pole sitter Andreas Bäckman, and got the better of the Swede on the first lap to claim a routine lights-to-flag victory.

From then on, it was a case of maintaining a comfortable, if slender, lead which never fell under one-and-a-half seconds throughout the 13-lap encounter.

Hungarian Tamás Tenke was a relatively lonely third all race, and stayed clear of an ensuing battle behind between the Peugeot 308TCR of Teddy Clairet, Mikel Azcona’s Cupra and the Hyundai i30 N TCR of Mat’o Homola.

All three ran closely as Clairet defended heavily from the quicker Azcona behind. The 2018 TCR Europe champion tried everything, but could not find a way past the Peugeot, while Homola was equally frustrated in his attempts to get by Azcona.

Eventually, Homola got past Azcona down the inside of Turn 1 with the pair making slight contact on exit. This allowed Bence Boldizs to move in front of Azcona, which he kept despite the advances of Azcona until the flag.

Nagy was able to open up the gap to Magnus in the closing stages, ultimately taking the win by a fraction over 1.7 seconds, while Andreas Bäckman claimed Race 2 pole with 12th place.

Despite starting on the clean side of the grid, Bäckman was unable to stop Langeveld forcing his way into the lead at Turn 1, the Audi emerging clearly in front, with Andrej Studenic’s Honda Civic Type R FK8 in third.

Studenic’s place was short-lived however, as Azcona forcefully overtook the Slovakian on lap two of 13, with Boldizs and Homola also moving up the order.

Magnus enjoyed a strong start and ran eighth early on as Nagy dropped to as low as 14th off the line.

Keen to make inroads into Nagy’s points lead, Magnus went on the attack and quickly relinquished Boldizs of his fifth place at Turn 2. Tenke then tagged the back of Boldizs at Turn 3, bringing Nagy onto the back of the Cupra, who eventually suffered more contact at the end of the lap.

At the front, Bäckman began to struggle and Azcona easily moved into second place at Turn 2. Homola then also made light work of the Swede, who fell behind Magnus and Teddy Clairet before the end.

Langeveld was rarely challenged for overall honours and beat Azcona by nearly five seconds by the flag, with Homola third.

Magnus finished fourth, while Nagy had to make do with a lowly eighth place behind Tenke.

Abdulla Ali Al-Khelaifi claimed a pair of ninth-place finishes in his Cupra, with Jimmy Clairet ending an otherwise frustrating day with tenth in the second race.